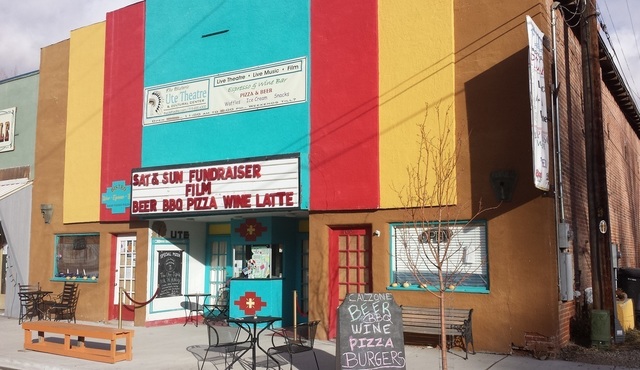 In the early-2000’s, the building was operating as Daisy’s Bookstore & The Ute Theatre. It had reopened by 2012, presenting a mix of films and live entertainment. It closed December 7, 2015. It reopened on June 21, 2019 as a live theatre/music venue & performance space.

September 2012: the Ute Theatre is open, presenting a combination of films, live music, and theatre. The front of the theatre contains a bar and snack bar/pizzeria.

The current owner of the Ute Theatre has a bit of information about its operation on this web page. The building dates from 1916 and was originally a livery stable.

A few years of the Saguache Crescent have been digitized and can be searched from this web page (you’ll have to answer a couple of brief consumer survey-type questions to view the scans.) In 1925 and 1931, a movie house called the Saguache Theatre advertised in the paper, and in 1937 there was a Rialto Theatre. I don’t know if these were AKA’s for the Ute Theatre or not. The earliest available year of the newspaper with ads for the Ute is 1943.

Drove through Saguache today, and found the Ute sadly shuttered. New pictures in the Photos section.

The official web site says “CLOSED as of 12/7/2015 UNTIL FURTHER NOTICE” As the web site is still up, they probably plan to reopen the theater at some point, but such plans don’t always work out. I can’t find anything on the Internet about why the house is closed.

A new theater opened in Saguache in 1928, and it is possible that it was the house that later became the Ute Theatre. This item is from the September 1, 1928 issue of Motion Picture News:

“Chas W. Ogden of Saguache, Colorado, will open his new Ogden Theatre early in September. This will make two theatres for the little town of Saguache, the other being the Opera House, managed by Mrs. McEntyre.”

Also, according to the official web site, the Ute Theatre will be reopening on June 21.

Boxoffice, June 15, 1964: “Mr. and Mrs. Earl McDaniel are opening the Ute Theatre, Saguache. The Ute has been closed for a year”