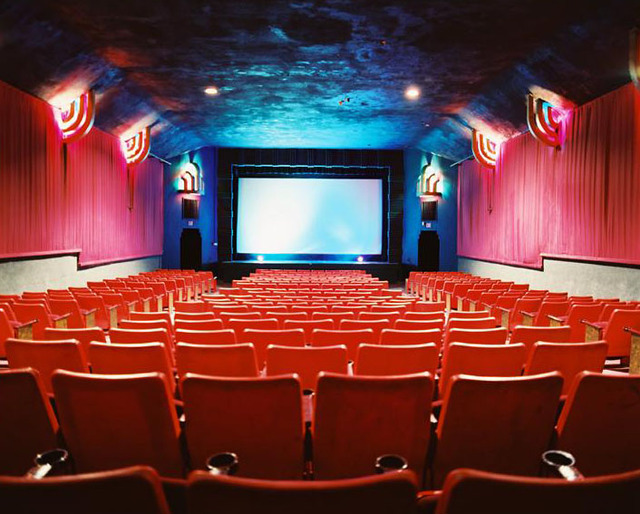 Once a small neighborhood house called the Oak Theatre, which originally opened in 1916 near the campus of the University of Minnesota, the theater was remodeled in 1935 by the firm of Liebenberg & Kaplan, who also designed the nearby Varsity Theatre and the suburban Edina Theatre, among many other area theaters.

Done in Art Deco style, it could seat around 400 in its elegant auditorium, which had then-cutting edge projection equipment. It also received a new name, the Campus Theatre on August 16, 1935. After decades of serving as a popular college area film venue, including a meeting room for film students in its basement, the Campus Theatre closed in 1989.

It briefly served as a venue for stage shows, but in 1995, was renovated and reopened as a movie house. It received another name change, harking back to its first name, as the Oak Street Cinema.

The Oak Street Cinema became one of the Twin Cities' best places to see independent, foreign, classic and other films, as well as host to film festivals like its ‘Cinema With Passion’, focusing on Asian film.

The Oak Street Cinema also worked closely with the neighboring University of Minnesota, and was operated by the non-profit group, Oak Street Arts.

It was also one of the very few old neighborhood theaters in Minneapolis that has never been chopped up into twin or more auditoriums, and theater-goers could enjoy classics on a large screen as they were meant to be seen.

Sadly, it was closed in 2010 and demolished in September/October 2011.

That may be true. Still, it’s hard not to be a little bitter when one considers their programs of summers past, like the fantastic Robert Altman retro in 2002.

The Oak has re-opened. They recently had Bergman Tribute which included a new 35 MM print of “The Seventh Seal”.

Any mention of the Oak Street Cinema without mentioning it’s founder, Bob Cowgill, would be incomplete. Bob’s steadfast vision for film exhibition in Minneapolis is responsible for the Oak Street Cinema’s very existence. He reclaimed the theater from disrepair and brought a vision to Twin City movie lovers with a passion and intensity only rivaled by Al Milgrom of the U Film Society. Bob’s hard-nosed business sense is what kept the theater alive in difficult times. It was Bob who understood that in order to do the kind of programming he envisioned, the theater needed to become a non-profit and to obtain corporate sponsorship. It was Bob who struggled mightily to forge the merger with the difficult, temperamental, and recalcitrant Milgrom so that both the Oak Street and the U Film Society could survive. Both Bob and I managed the Campus Theater early in our ‘movie careers’. In 1975, I recruited him from the Campus Theater to manage the Cedar Theatre across the river. I am pleased to have had him as a friend all these years and to have the opportunity to acknowledge him here for making the Oak Street Cinema a treasure among the nation’s movie theaters.

This cinema will closing soon. Plans are to raze it.

The Oak Street Cinema is closed. The city has shut the building as unsafe. I believe it is pending sale and demolition.

The Film Society of Minneapolis/St. Paul will be leaving the Oak Street Cinema for good with an Open House and Sale on Aug. 25, 2011. According to the organization’s email announcement, the block on which the theater stands is slated for redevelopment.

Sadly, the theater is now demolished. Here is a link showing several photos of the demolition. View link

Ah no! say it isn’t so! I went there a bunch of times.