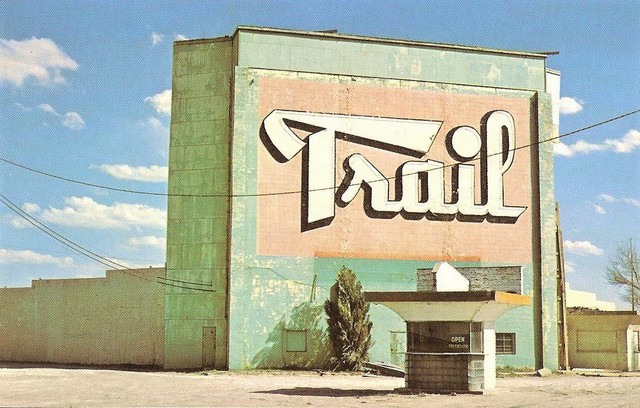 The Trail Drive-In opened on April 29, 1948 with Randolph Scott in “Gunfighters”. It was operated by W.O. Beardon, who later operated the Sunset Drive-In and Tascosa Drive-In. From 1971 until 1983 when it closed it was screening adult movies. Car capacity was 400.

Only logical place for the drive in on E. Amarillo Blvd….. 1991 view shows the same outline, but with no buildings or structures on site.

This address will map to the location of the drive-in. The drive-in is visible using Google Earth.

I was only at The Trail Drive-in once. The movie was so bad I never even listed it in my Movie Log. After the closure of the air base and the diminished traffic and activity in that direction the Trail was doomed. They tried X-rated movies for a while then Spanish flicks and amazingly ran family pictures for a month or so but it closed long before all the other drive-ins in town except the Palo Duro. Shortly after that it burned down. I don’t know why so many Amarillo drive-in screens burned down.

A fire at the Trail Drive-In Theater, 7500 E. Amarillo Blvd., early this morning caused an estimated $4,500 damage, including heavy damage to the movie screen.

The blaze was reported to Amarillo firemen at 3:19 a.m. The first report came from a passing motorist and the second call was made by an employe of an all-night service station across the street from the drive-in.

La Roy Doyal of 1313 Avondale, manager of the theater, said the exact cause of the blaze has not been determined, but it is believed to have resulted from faulty electrical wiring.

Doyal said the theater would not be able to reopen until repairs could be made to the electrical circuits and the movie screen rebuilt.

The last year that the Trail advertised regular movies in The Amarillo Globe Times was 1970. By 1971, it was showing X-rated movies. On January 27, 1977, the Globe Times reported that the Trail was still active and still X-rated.

John Margolies shot a photo of the Trail in 1977, and it still had an Open sign visible in the box office window. That picture is available at the Library of Congress.