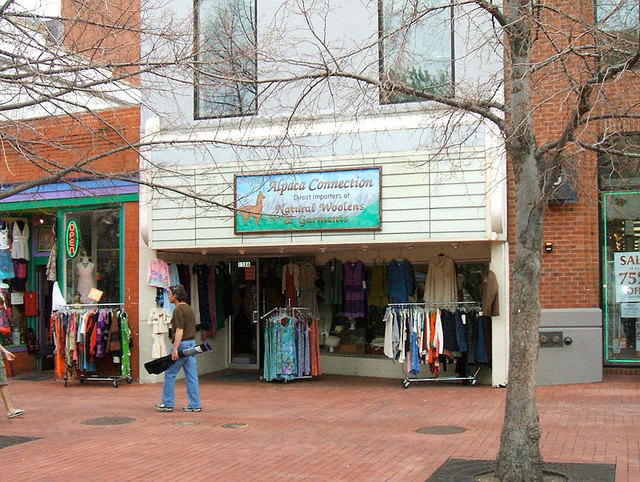 Opened as the Varsity Theatre by Fox Intermountain Theatres in 1941. It was closed in 1956 and became a music store. It reopened in January 1965 as the Art Cinema. Screened Indie and midnight movies. Organic popcorn and bottled water served in the 1980’s.

The recent opening of the Art Cinema was the subject of a brief article in the January 25, 1965, issue of Boxoffice Magazine. The building had housed Aber’s Music Store for the previous nine years, but prior to that it had been the Varsity Theatre, a Fox Intermountain house that had opened in 1941, itself apparently inserted into an existing retail building. According to the caption for this photo at the Boulder Public Library, the address was 1326 Pearl Street. The operators of the Art were a pair of exhibitors from Denver named Bill Ramsay and Dick Martin.

Boxoffice gave the original seating capacity of the Varsity as 650. The building in the photo looks too small to have contained so large a theater, but Google Maps satellite view shows that the back half of the building is twice as wide as the front, so maybe there were that many seats, if they were very close together. Still, I’d imagine that as the Art it had far fewer.

Judging from the satellite view, it seems possible that the building held a theater even before the Varsity was opened, and had perhaps already been converted to retail use once before. Boxoffice gives no information on this, though.

Unfortunately for Google Street View, Pearl Street has been converted to pedestrian use, and the Google camera truck was unable to get a current photo of the facade. There’s a Google Street view of the alley side of the building, though, and it features what look like a pair of small exit doors at each end such as a building built as a theater would have had.

CapnRob’s comment of January 5, 2009, on the Cinema Treasures Fox Theatre page has a bit more information about the Art and other Boulder houses, and is the source of the link to the Boulder Public Library photo above.

Sorry I guessed the seating so poorly. I just remember that it seemed really tiny.

Here’s a link to the photo http://www.dogmatches.com/cr/artcinema.jpg

The seating capacity might never have been as high as 650. The figure Boxoffice published for the Varsity might have been exaggerated, as was often the case. Still, in the 1940s, theater owners did tend to cram the seats pretty close.

But whether the Varsity’s stated capacity was exaggerated or not, I’m sure the Art had fewer seats, as by the 1960s patrons were demanding more comfort, meaning bigger seats spaced farther apart. Judging from the satellite view of the building, I don’t think they could have put in more than 300 seats in that space and maintained the level of comfort a 1960s audience would have wanted, so your estimate probably wasn’t that far off.

The Varsity Theatre was opened by Fox Intermountain Theatres in 1941. It was closed around 1960, and remained shuttered until 1970, when it reopened as the Art Cinema.

The actual theatre space was a one-level addition to the rear, behind the lobby space and the adjacent storefront to the east. This configuration was similar to other large movie theaters, including the Roxy and the Paramount in Denver, but on a smaller scale. The space is now an arts and crafts coop.