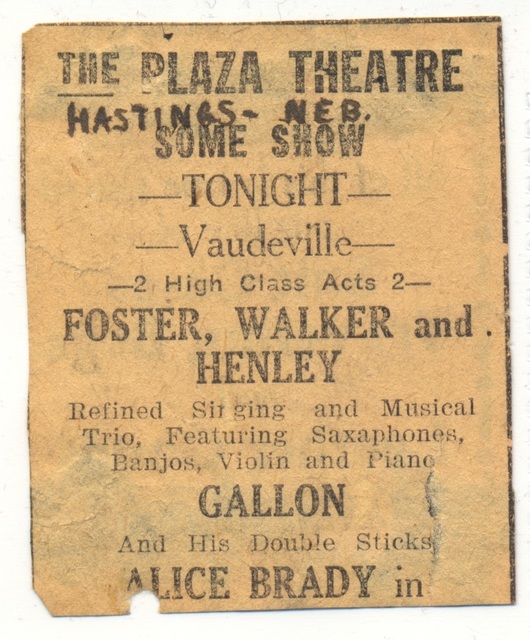 In issues of Film Daily Yearbook prior to 1941, the State should appear under its former name, the Cornhusker Theatre. It had been remodeled and renamed by a new owner that year, according to Boxoffice Magazine’s issue of December 13, 1941.

Most probably the building was merely gutted, but since blocks of old buildings such as this one share common walls with their neighbors, it’s difficult to tell how much of the interior of this one might have been destroyed by the fire. The floors and/or roof might have been gone altogether, or just moderately damaged. A heavy masonry facade and rear wall of a narrow building that’s part of a row will often survive a fire that completely destroys the interior.

A 1917 book called Past and Present of Adams County provides this information about early movie theaters in Hastings:[quote]“The first moving pictures exhibited in Hastings was during the street fair of 1899. The first moving picture theater was opened at 214 North Hastings Avenue, the present location of the clothing store of Harry Proffitt, by Fred Hayter, associated with Mrs. C. S. Epley, the present proprietor of the New Edison. This theater was called The Nickel and the opening date was June 3, 1907. Mr. Hayter continued in the business about two years and then went to California where he was engaged in the same business. In the fall of 1916, he purchased the Plaza, which is the continuation of his original house.

“The Brach Theater was erected by William Brach and is the first elaborate, exclusive moving picture theater to be erected in Hastings. The house was opened October 8, 1916. Charles A. Beghtol is the proprietor.

“Next to the Plaza, the Wonderland is the oldest moving picture house in Hastings. It was opened at the present location on Second Street about a year and a half after the opening of the Nickel, by B. F. Livengood who managed the house for an Omaha man. For about two years the Gay Brothers, Stanley C. Gay and Sidney F. Gay were the proprietors. It was bought from the Gay brothers by W. A. Walden who was the owner for several years. Since the spring of 1916 Mrs. Walden has been the owner of the Wonderland.”[/quote]As no addresses are given for the New Edison and the Wonderland, it’s possible that either name could have been an aka for the State (the Brach was later the Strand.) The photo of the State linked in Lost Memory’s comment near the top of this page show that it was in a fairly old building. Maybe somebody with access to old directories or newspapers for Hastings could check to see if either the New Edison or the Wonderland shared an address with the State.

Being from Hastings, I’ll fill in the info. The photo that shows at the top is of the Rivoli Theater that was across the street from the State. The Rivoli is still in business. If you rotate the view of the picture and view across the street, the State was where the Stylist business is today in a more modern building. The Strand building is no longer a theater but instead houses several businesses.

Thanks for the information, Danielkoch. I’ve updated the Street View to show the correct location of the State Theater.

Wondering about the “Next to the Plaza” quote above. I have been using this web site to find out more about theaters my great-uncle playing in during the 1917-1918 vaudeville era, and I have a newspaper ad clipping from The Plaza Theatre circa September 1917.

Was the Plaza renamed to the State?

vaudevillegeek: If I read correctly the 1917 book I cited earlier, “…the Plaza, which is the continuation of his original house….” must have been at 214 N. Hastings, the location the book gave for the Nickel Theatre, opened by Mr. Hayter in 1907. If that’s the case then the Plaza was not the same house that later operated as the Cornhusker and then the State. I’ve found the Plaza mentioned in a couple of trade journal items from the 1910s, but they provide no details about the house.

Working backwards, Abbott & Costello and the Andrew Sisters launched the new State Theatre on January 1, 1942 an update to the Cornhusker Theatre building. The Cornhusker ran likely on a 10-year lease from January 21, 1931 to 1941 as Hastings' “Intimate Talkie Theatre” operating along with the Rivoli. Prior to that it appears to have been run as the Empress Theatre which opened in May of 1915 likely on a 15-year lease. It had converted to sound late in 1928 and shut down in 1930 likely moving the Vitaphone equipment elsewhere and closing with the silent exploitation film, “The Pace That Kills” on February 19, 1930.