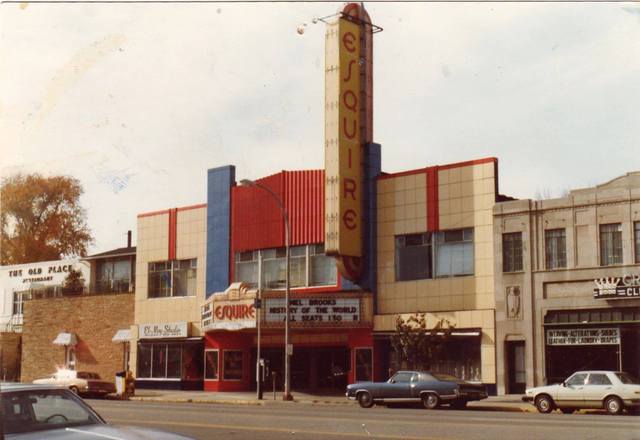 The Esquire Theatre served as a first-run theater for much of the time it operated, until it was acquired by R & R Theater Company in 1980, and switched to second-run features.

Causing another bit of controversy in 1982, R & R screened the notorious adult film “Debbie Does Dallas”.

A year later, Eric and Ervin Steiner purchased the Esquire Theatre not long after it was closed by R & R.

The Steiner brothers divided the Esquire into four small auditoriums, returning to first-run films. In 1988, the city closed the Esquire Theatre down and took possession of it, claiming that the theatre had become a magnet for illegal activities. It was demolished in 1990.

Here is part of a 1946 case decided by the Michigan Supreme Court:

The Esquire Theatre Corporation, a Michigan corporation, was the owner of the Esquire Theatre Building including a small adjacent store in Grosse Pointe Park, Michigan. The Bankers Trust Company was appointed trustee of the Theatre Corporation January 7, 1944, for certain purposes including liquidation of the corporation. On January 14, 1941, the theater corporation entered into a lease under which plaintiff became its tenant. The lease was for a period of five years and covered the east store and the lobby concessions of the theater, the latter being a small space in the lobby. Plaintiff carried on the business of vending confections, cigars, novelties, operating a delicatessen, soda fountain, et cetera. The lease provided for rental of $100 per month. It also provided that upon its expiration the lessee shall have the right to renewal for a like term “at such rental as these parties shall agree upon.” It is conceded in defendant’s answer that plaintiff is entitled to a five-year renewal at a fair and reasonable rental. The parties were unable to agree on the rental to be provided in the renewal lease, and thereupon plaintiff lessee filed a petition in the circuit court of Wayne county wherein the court was asked to determine what would be a fair and reasonable rental to be provided in the renewal lease. The petition recited that the lessor was demanding that the renewal rental should be $350 per month. Plaintiff asserted such demand was unreasonable and excessive and claimed $125 per month would be a reasonable rental. Defendant appeared and answered, in effect alleging that its demand of $350 monthly rental was not unreasonable or excessive, but on the contrary was fair and reasonable. After hearing in open court an order was entered fixing the rental for the renewal period at $275 per month. Both parties have appealed.

The fair rate of rental fixed by the trial judge at $275 per month is affirmed, but the decree will be amended by extending to 30 days after decree in this Court the time within which plaintiff shall vacate the premises in event he does not elect to renew his lease. The decree to be entered in this Court will also remand the case to the circuit court for any further proceedings therein. Defendant will have costs of this Court.

Kenneth S. Frazier’s name and stamp are on the original blueprints for the theatre. C. Howard Crane’s name does not appear anywhere on the planes. Also listed as the owners of the theatre at the time it was built was the Esquire Theatre Corporation.