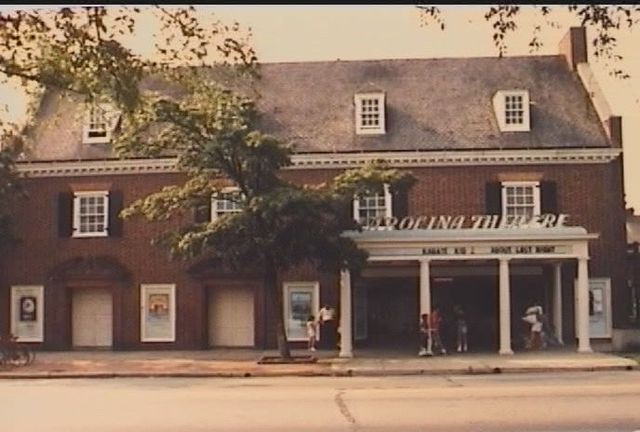 In 1971, it was split into two screens, keeping the original lobby entrance. One screen was the ‘Blue’ auditorium, the other was named the ‘White’ auditorium. It remained that way until the 1990’s, when the building closed and was relocated as a single screen theatre that played arthouse features and independent films. The last movie to play at the Carolina Theatre was the documentary feature “The March of the Penguins”. The theatre closed its doors for good in July 2005, and its lobby was converted into a Gap store.

Please do look at the link above for the history of the theatre. In The Charlotte Observer, August 18, 1961, page 1, Section B: Headline: Theatre Will Admit UNC Negro Pupils; “Carolina Theater here adopted a policy of limited desegregation Thursday. The policy applied only to Negro students at the University of North Carolina…Theatre officials said they believe it to be the first in the South to adopt a policy of integration.” But the docsouth link above will reveal that this ‘limited desegregation’ wasn’t the real thing and therefore the theatre was still picketed.

I remember seeing “E.T.” on the Blue Side,and on the White Side showed “Star Trek II:The Wrath of Khan” on June 11, 1982 when the Carolina was a twin cinema with its original lobby entrance.

The only STAR WARS film that ever played at the Carolina was THE RETURN OF THE JEDI that opened to capacity crowds on May 25, 1983.

THE NEW CAROLINA THEATRE opened on March 19,1993 as a full scale arthouse cinema with a seating capacity of 280 including handicap access sections and full gourmet concession stand that served alcoholic beverages. Owned and operated by Bruce H. Stone.

The featured attraction for the grand re-opening: -Albert Finney and Kyle McLaughlin in RICH IN LOVE -Special Late Show Friday and Saturday was SWOON

The COMING ATTRACTIONS TO THE NEW CAROLINA THEATRE:
–“HOWARD’S END”

-Al Pacino in “SCENT OF A WOMAN”

–“THE MAP OF THE HUMAN HEART”

Opened on October 15,1942 as the CAROLINA THEATRE under Wilby-Kincey/Paramount/North Carolina Theatres that had a seating capacity of 1,145.

It remained a single screen theatre until 1971 when the original auditorium was split into two sections seating 571 each in both auditoriums as a twin theatre keeping the original lobby entrance. It was renamed the CAROLINA BLUE AND WHITE THEATRES,aka THE CAROLINA 1 & 2 under ABC Southeastern Theatres.

Wilby-Kincey ran this theatre as a single screen cinema from 1942 until 1971.

ABC Southeastern Theatres took over the operations from 1971 until 1978.

Cineplex Odeon was the last theatre chain that operated the Carolina from 1987 until 1990,and it was Cineplex Odeon that closed the original CAROLINA THEATRE in 1990.

By March 19,1993,the CAROLINA THEATRE reopened to the public and all of Chapel Hill as a full scale arthouse cinema that specialized in showing first-run releases as well as independent and foreign films as well as documentaries. Where the original entrance was facing Franklin Street the new entrance was toward the side of Columbia Street(right next door to the Ackland Art Museum). It was renamed as the NEW CAROLINA THEATRE where it was a single screener with a seating capacity of 280. Special features included in this new cinema were access handicap seating as well as full scale gourmet concession stand that also served alcoholic beverages. The new auditorium had a prominent position where the original marquee was placed below the front of the screen. The owner who refurnished the NEW CAROLINA THEATRE was Bruce H. Stone who also operated the Chelsea Theatre at Timberlyne Shopping Center(located in the Northern section of the city). THE NEW CAROLINA THEATRE remained a showplace for great films until it’s closing on July 2,2005. The last picture show that played here to great fanfare and capacity crowds was the Oscar winning documentary “March of the Penguins” narrated by Morgan Freeman.

“RETURN OF THE JEDI”

LAWRENCE OF ARABIA played here at the CAROLINA as a general release on April 2,1964.

For more about this theatre’s history please go to this site for further information. The address site is: http://www.docsouth.unc.edu

During the 1950’s and continuing into the early-to-mid 1960’s,the CAROLINA THEATRE on East Franklin Street in Downtown Chapel Hill became the subject of numerous protests and boycott demonstrations regarding this theatre’s segregation policies of not admitting people of color. This theatre was heavily picketed and boycotted when it refused to let African-Americans enter during the showing of “Black Orpheus” on August 18,1960. The sit-ins continue outside the main entrance of the theatre and was picketed until the film ended its weekly run on August 25,1960. Regarding the status of its policies numerous protests continued. Another film that really brought it to national and local attention regarding its segregation policies of not admitting black patrons continued when protests and numerous sit-ins outside the main entrance of the theatre as well as demonstrations when the CAROLINA THEATRE showed the film “Porgy and Bess” starring Sidney Poitier and Dorothy Dandridge that played for a week running from January 2,1961 until January 9,1961. Numerous protests and sit-in demonstrations continue outside the main entrance of the theatre became front page news in the January 9,1961 edition of the Chapel Hill News with the main front heading titled:

This theatre was still picketed during the course of the film’s run in the town along with the other segregated cinema,THE VARSITY which was basically across the street and other Chapel Hill establishments that were fully segregated. It wasn’t until March of 1962 that a federal court order the CAROLINA and the VARSITY to integrated along with other businesses within the town. The CAROLINA on January 10,1961 replaced “Porgy and Bess” with another feature starring Sophia Loren in “A Breath of Scandal”,but still the theatre was still picketed and sit-ins outside the main entrance of the theatre continued. By,1963 the theatre was integrated due to a federal court’s desegregation order of all major businesses within the town of Chapel Hill.

THE NEW CAROLINA THEATRE opened on October 15,1942 as Chapel Hill’s newest and most modern design theatre with a seating capacity of 1,145.

NOW SHOWING at Chapel Hill’s NEW CAROLINA THEATRE: It’s Ginger Rogers along with Ray Milland in “THE MAJOR AND THE MINOR”

The coming attractions……. The Big TECHNICOLOR musical event of 1942 “SPRINGTIME IN THE ROCKIES” Starring Betty Grable

“WAKE OF THE RED WITCH” with John Wayne