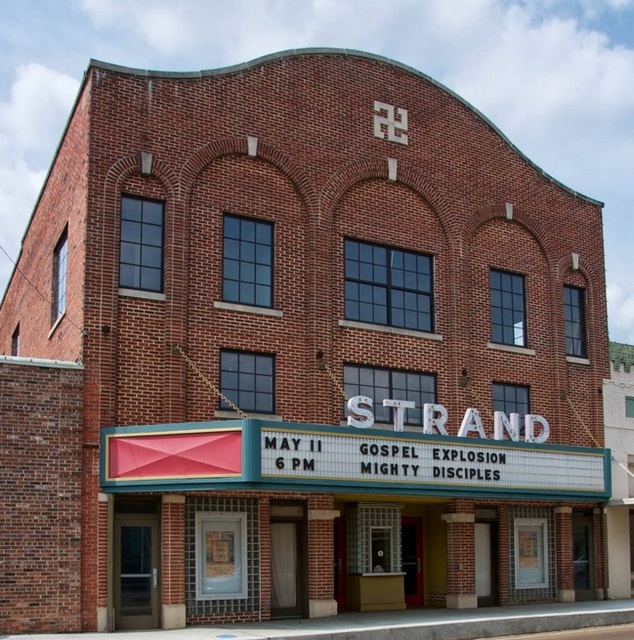 I noticed on the county website it calls the Strand Theatre a historic building, it is known to have been operating since April 12, 1918. By 1941 it was operated by the Memphis, TN based Strand Enterprises Inc. chain. I know that it ran as a single screen for many years and was converted to a two screen.

After closing as a movie theatre it was completely renovated and is operated by the community for live performances.

The building supposedly pre-dates the Nazi era of world history. Not really sure what the symbol signifies though. I am meeting with the owners of the theatre this week about showing films there and one of the items on my agenda is the building’s history. I will share what I learn.

If memory serves correctly, the Strand was operated in the mid-1950s by the West family who moved on to operate the Hollywood Theatre in Memphis. Malco operated it for a time until about 1960. Then, the Clark family, who ran drive-ins in Louisville and Philadelphia, took over. In the early 1970s it was twinned by building a wall down the center of the auditorium and walling off the balcony, making the front of the balcony into booths for the two auditoriums. Originally, it was a pretty poor job of twinning-the sound bled terribly. Nevertheless, improvements took place over the years, correcting the sound problems and adding drapes and comfortable rocking chair seats. Eventually, there were two jewel box auditoriums which were really, really nice for a small town like Louisville. A new theatre was built elsewhere in town. Since then, the Strand has returned to being a single auditorium.

Chuck, it is not a sawastika. If you look,the lines do not run the same. It is a native american symbol for medicice. The upstairs portion of this building was a medical clinic long before it was a theater.

My wife was born in 1945 in the clinic or hospital above the theater. The movie playing playing was “When Irish Eyes are Smiling.” This would indicate that it was both a hospital and a theater at the same time (at least in 1945).

Does anyone know who the original owner of the theater was or if they were from German descent?