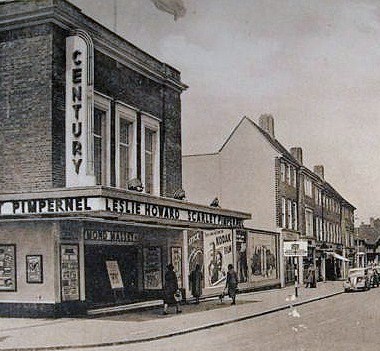 Located on Station Road (today Station Way) on the north corner of Kingsway Road, in the centre of Cheam, Surrey. The Century Cinema was opened on 22nd March 1937, with actor Tom Walls appearing in person. Designed by Granada Theatres architect James Morrison, this was his final solo scheme, as he died later in the year, whilst working on designs for the Granada Theatre in North Cheam. The Century Cinema had a plain brick exterior, with three windows surrounded in white stone. There was a vertical fin sign with the name ‘Century’. Inside the auditorium seating was provided for 768 in the stalls and 233 in the circle. The decoration was in a simple Art Deco style, carried out to the plans of interior designers Mollo & Egan.

When the larger Granada Theatre opened in North Cheam later in 1937, the Century Cinema played mainly second run and even foreign films, which were appreciated in this rather affluent area of what today is located in the South-West of Greater London.

The Century Cinema received some bomb damage in March 1941, which resulted in it being closed for several months. It was bombed again on 17th June 1944, and didn’t re-open until May 1945. It was refurbished in 1948, and was closed on 15th December 1956 with Van Johnson in "23 Paces to Baker Street" and Jeanne Crain in "City of Bad Men".

This was one of two cinemas that used Eugene Mollo’s Photoscan technique the other was the Lansdowne News Theatre Mayfair January 1937 It was a very difficult procedure and expensive. Mollo had Patented the process both here in 1935 and United States 1937.