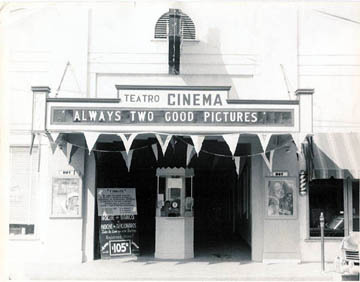 This theater opened sometime in the 1930s, and has been nearly forgotten. It had a simple Spanish stucco facade and a plain, rectangular marquee. Said to be the first theater on the San Mateo Peninsula to feature Spanish language films fulltime, this was the theatre’s final policy.

Demolished for city parking in the late 50s or 60s, a stretch of pink-tinted concrete remained to mark where the entrance was, until the renewal of the sidewalks a few years ago.

Joseph Perez, Mountain View’s first Mexican-American mayor and a former employee of this theatre (known as Blanco’s Cinema or the Cinema Theatre) said the following in a 1977 city oral history project interview:

“There were quite a few Mexican stars who were quite popular. They were an attraction when their movies played in Mountain View. I think we used to go see them whether they were good movies, or not. The Cinema Theatre was kind of a social center. We not only went to see the movies, but when I went, it was a chance to meet my wife, who was my girlfriend then. That was the magnet for me and I used to enjoy the movies.

The Cinema Theatre was located on the corner of Dana and Bryant Streets. It is a parking lot now, unfortunately. The theatre was quite popular with the Mexican Community, but for some reason it started to go downhill and the attendance started to dwindle. That was in the mid-fifties sometime.

“I remember when they closed the (Cinema) theatre, I talked to (Manuel) Herrero [the theatre’s manager]. I asked his name and asked, "Why are you closing this theatre? This is the only Spanish theatre.” He said, “Well, the orchards are going and we really have it open for the farm workers to come here. Once the farm workers are gone, we have no more people.” I remember saying to him, “What do you mean, you have no more people? There are people like me. I’m not a farm worker and I love to come. All of these old-timers, the Spaniards; all of these people are not farm workers.” “Well,” he said, “We just can’t afford them. After all, who wants to see Mexican movies?” I’ll have to tell him that now. It really hurt me to hear that: “Who wants to see Mexican movies, except farm workers from Mexico?”

The Cinema had a lot of good-name movie stars come there. I remember Pedro Infante. They had a Mexican actress who committed suicide, a blond gal. Right after she left here, about six months later, she committed suicide. Her name was Miroslava. Then I think there was Perez Mesa. He still sings. He is a ranchero singer."

Both Mrs. Butler and Mr. Perez were friends of my grandparents. At the time of their interviews, Mountain View, ironically, had an even larger Spanish speaking population then when the theatre closed in the 1950s. Hence Mrs. Butler’s frustration with Manuel Herrero’s assertation that the loss of the orchards would result in the departure of the city’s Mexicans. To this day Latinos make up about 20% of the city’s population.