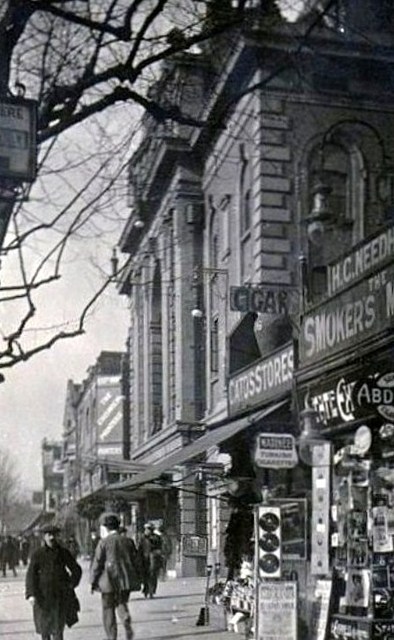 Located in the west London district of Chiswick. It took impressario Oswald Stoll over a year to gain planning permission to build the Chiswick Empire Theatre. Much of the opposition came from the belief that a music hall/variety theatre was considered not to be an appropriate form of entertainment for the affluent citizens of the district of Chiswick. Eventually plans were passed and the Empire Theatre was built on a location on Chiswick High Road, opposite Turnham Green and Christ Church.

Again, noted theatre architect Frank Matcham came up with a splendid theatre building. The exterior in a Neo-Classical style had a large two storey centrally placed opening, which contained an open verandah. Inside the auditorium the seating was arranged for 890 in the orchestra stalls, 454 in the dress circle and 596 in the balcony. The proscenium was 44 feet wide, and there were ten dressing rooms. The orchestra pit could hold 15 musicians and the theatre had a resident orchestra of 12.

The Chiswick Empire Theatre opened on 2nd September 1912 with a star studded variety bill. In keeping with the up-scale ditrict of Chiswick, plays were also staged. It was during rehearsals for a play "The Devil’s Dream" on 19th August 1913, that a fire destroyed the stage and badly damaged the auditorium. The theatre was closed for three months for rebuilding and repairs to be carried out. It re-opened on 15th November 1913 with a play named "The Miracle".

Chiswick Empire was a popular theatre, and during the 1920’s played regularly to full hooses on its twice nightly schedule of variety, which now included weeks of revues, plays and also occasional opera. In 1932, it was converted into a full time cinema when a Western Electric sound system was installed. But this was a short lived venture, as variety soon returned, but films continued to be screened on Sunday’s, when live performances were prohibited. Among stars appearing at this time were; Marie Lloyd, Clara Butt, George Formby, Dame Sybil Thorndyke, Donald Peers, Nina Mae McKinney and Albert Whelan. Pantomimes were also a popular attraction around Christmas-time.

The Chiswick Empire Theatre was forced to close in the height of the London blitz during World War II, and it didn’t re-open until late-1941. Artists appearing during the 1940’s were; Vera Lynn, Lucan & McShane(Old Mother Riley), Jimmy James, Arthur Askey, Jimmy Jewel & Ben Warriss. The Ben Travers farce "Rookery Nook" was performed, and in 1947, Laurel & Hardy played for a weeks engagement during their first tour of the UK and Chico Marx of the famous Marx Brothers appeared.

The theatre remained popular right to the end of its days, with artists such as Max Wall, Joan Regan, Ken Dodd, Ronnie Carroll, Terry Thomas & Alma Cogan topping the bill. Rock ‘n Roll was catered for with "The Stars of Six-Five Special" starring Wee Willie Haris & Terry Dene, and there was a visit by the Carl Rosa Opera Company. The final week ended on 29th June 1959 with flamboyant American artiste Liberace appearing to sell out houses. Within a month the Chiswick Empire Theatre had been demolished and on the site, an office block name Empire House was built.

I was often taken to this theater as a child, and always enjoyed the shows there. Not being wealthy it was always the “Gallery” (upper circle) and many stairs.
Watched variety shows, pantomimes and even ice shows there. Pity is closed.
The Piccadilly Line passes by the site of this theater just before passing into Chiswick Park from Hammersmith. Look out the left side you will see a office block where foyer and part of the auditorium stood and a supermarket built on the space which was vacant around the back of the theater.
John