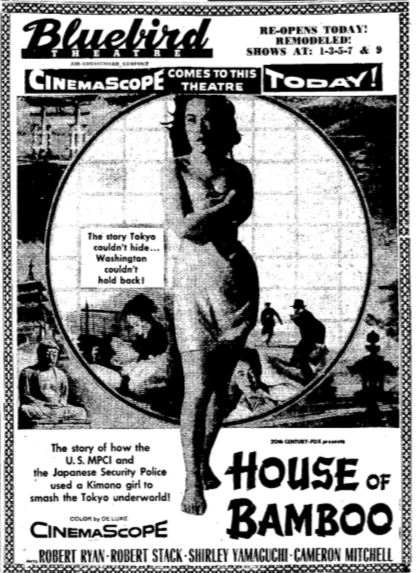 Opened as the Colonial Theatre around 1927, by 1928 it had been renamed Bluebird Theatre with 650-seats. It was closed on July 9, 1958 with Steve Reeves in “Hercules” (La fatiche fe Ercole". The building is now being used as a beauty salon and beauty supply store.

My grandmother was the manager at the Bluebird during the 70’s and early 80’s. I remember seeing Piranha there and a few spaghetti westerns among others since I was able to get in free. They mostly showed exploitation films, B movies and a lot of black exploitation films during the 70’s (Shaft, Superfly, Blackula etc.) The clientele at that time were largely students from VSU. They may have shown XXX films during the 80’s but I can’t remember since my grandmother left and went to the Walnut Mall theater. It has since been restored but not into a cinema to my knowlege.

The Bluebird was a long, narrow theatre and it played first-run movies. It had two aisles with three seats on each side section and six across the middle. The fire exit was on the right side at the front of the auditorium and there was a blue neon clock at the back. It had stage curtains, a curved CinemaScope screen in the correct aspect ratio, and a balcony. The concession stand was on the left side of the lobby as you entered. The box office was out in front and not attached. The theater did a very good business, but it closed because Neighborhood Theatres, Inc. lost the lease on the building. The Palace Theatre down the street took over its role as a first-run theatre and was renamed the New Bluebird.

The Bluebird Theatre in Petersburg was designed by architect Fred A. Bishop, according to a partial list of his works that appeared in the October 25, 1930, issue of Exhibitors Herald-World.

MEMORIES: Bob Jones around 1958? Chrismas Day went to the Bluebird day of “KING KONG” showing & was last in & they had a contest & my draw slip was given to managers as they had taken the box away at the door. As a kid I didn’t get a bike for Xmas, but I somehow won that bike that day & “wow” what a feeling to go home riding a bike to 629 High St. (Unbelievable to me as a child, I have such a fond memory or the, to me “Bluebird”. Never had anyone til today I felt I could share this with,but with this it will always be part of my “Bluebird” days @ 77 now never ever forgot that day!

50sSNIPES: See the page for the New Bluebird Theatre. The name was moved there when this house closed in 1959, and the Bluebird operated at that location (143 N. Sycamore) into the 1980s.

OH! NOW I GET IT! Thanks Joe! I Just Can’t Find The Articles From The Petersburg Index.

I believe I saw the article I cited at newspapers.com, but since then that site has put its content behind a paywall, so I, not being a subscriber to their service, don’t have access to it anymore.

That’s What I Look Up Information About The Theater. The Bluebird Had A Few Confusing Articles As I Did Find The Petersburg Index Off Of That Site.