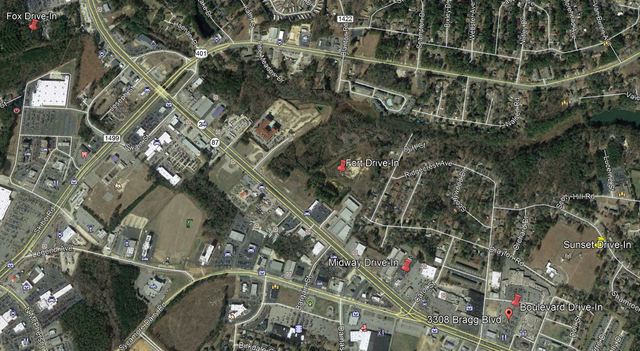 Known as the second largest drive-in theatre in Fayetteville, the Boulevard Drive-In Theatre opened in 1955 under the management of the Queen City Group, which was based in Charlotte.

In 1964,the Wilbey-Kincey Group took over the operations after Queen City folded and it remained that way until the mid-1970’s when ABC Southeastern Theatres took over the establishment. It closed in the early-1980’s, when it was under the Plitt Theatres Group. Served the communities of Fayetteville and Fort Bragg and Cumberland County.

3308 Bragg Blvd is the Boulevard Drive-In.

Question for the group.

Just to the north of the Boulevard Drive-In is the remnants of what appears to be yet another drive-in which is located at 3310 Rogers Dr. You can clearly see the ramps and the setting is perfect for a drive-in (downward slope to the screen).

A 1971 aerial either shows that drive-in was closed and demolished or perhaps it was never completed. This is because the ramps are intact, but no indication of a projection booth/concession stand foundation.

It also never appears on any topo maps dating back to the mid-1950s despite the Boulevard Drive-In being present.

Does anyone know if this drive-in was ever completed and opened?

@Kenmore I don’t think those are ramps I think that’s how they plowed the field. When you zoom in close you’ll see all these lines just like the straight plowed field next to it. That’s my opinion anyway, it would be a weird location for a Drive-In theater which were usually located on main roads. But I may be wrong, they may have plowed it that way due to there being ramps.

@Kris4011 If you look at the Google street view from Rogers Drive, it does not appear to be plowed nor are they terraces. They have the distinctive “bumps” of car ramps.

However, it is true that the ramps seem slightly closer together compared to the other drive-ins. So, while I’m not discounting anything, this has all the signs of a drive-in (either independent or an expansion) that was abandoned before completion.

A 1954 topo map shows that there was a road that ran along the east side of the property which was removed when the neighborhood was put in. Perhaps that has something to do with it or not.

Okay…I just uploaded the current location of the drive-ins in area. We did find reference for Sunset Drive-In also..we have not researched that out yet.

@Kenmore Your right the street view does look terraced it also looks like patches of gravel on the sides like it was a gravel drive. This may be the sunset as referenced by Drive-In 54

I like the 1971 aerial on historicaerials.com you can back it out to see all 4 drive-ins and the terraced lot on rogers dr.

Also if you go north of Fort Bragg on Bragg Blvd to Spring Lake NC there is a Drive-In Theater on the 1955 aerial on Historic aerials it is in the Y of the road where there is a Walgreen’s Located today.

This Drive In Theater Located at 200 N. Bragg Blvd Spring Lake, NC is replaced by a shopping center in the 1971 historic aerial. Maybe this is the Sunset?