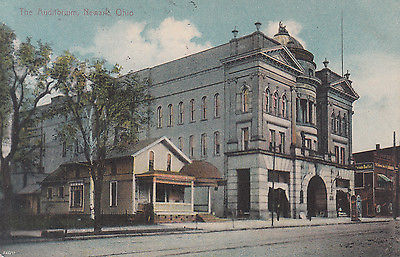 The Auditorium Theatre was built as the Soldiers & Sailors Hall in 1894. It opened as a movie theatre prior to 1923. It was remodeled and enlarged in 1947/1948, to the plans of architect Harry C. Holbrook, completed by the architectural firm Alcox & Stritzel. The façade of the building was ravaged by fire in 1968. It operated as a motion picture theatre named Cine 1 from December 25, 1969 opening with Ron Moody in “Oliver”. It operated through sometime in the 1980’s.

There was a drive by the citizens to save the building since it was the former Soldiers & Sailors Hall, but to no avail. The building was demolished in 2002. Today there is a small plaza and memorial where the theatre once stood.

The Auditorium Theatre, then operated by Shae Theatres, was to be closed on May 5, 1947, for an extensive remodeling, according to Boxoffice Magazine of April 26. The project was to include an expansion of the auditorium to increase seating from 800 to 1,160.

The original plans for the project had been done by Columbus architect Harry Holbrook, who died before the project began. The completion of the project was handled by Larry Alcox and Fred W. Stritzel of the Columbus firm of Alcox & Stritzel.

The January 24, 1948, issue of Boxoffice reported that Shae’s Auditorium Theatre in Newark was open again after having been closed for almost a year for a complete rebuilding.

Does anyone have any photos of this theater in the 1940s, 1950s or 1960s? I just obtained a CinemaScope projector lens with the name of this theater etched in it. Please let me know! Thanks, Mark

I was told at one time there was more then the Midland, the Auditorium in Newark, Ohio. Doe’s anyone remember the names and locations of any others in Newark.

The Soldiers & Sailors Memorial Building was built in 1894. A vintage photograph of the Baroque Revival style building can be found on page 16 of Honoring the Veterans of Licking County, Ohio:, by Aaron J. and Nathan J. Keims (Google Books preview.) The facade was ravaged by a fire in 1968, but the building was not demolished until 2002, after repeated efforts to have it restored had failed.

This reopened as Cine'1 on December 25th, 1969. Grand opening ad in the photo section.

Tma8446: Into the 1950s, downtown Newark also included the Grand Theatre (South side of the Square) and the Arcade Theatre (located in the Arcade Annex). In earlier decades, Newark also had its share of storefront movie “theatres” and nickelodeons.

The statues that were part of the Soldiers and Sailors Memorial Building have long been displayed in front of the VFW on Forry Street in Newark.