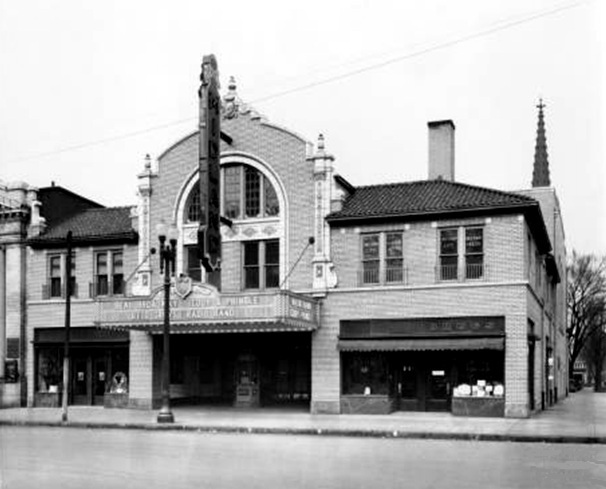 The Midland Theatre was opened on December 20, 1928 with Nancy Carrol & Gary Cooper in “The Shopworn Angel” (a part ‘talkie’ picture). It was designed for movies and stage shows. It had a full working stage and was equipped with a theatre pipe organ. It had closed by 1992 when it was reported to be suffering heavy interior damage due to roof leaks. It was restored around 2000.

Here is a December 1963 ad from the Newark Advocate:
http://tinyurl.com/rc2g8s

From the photos I just saw of the theatre, the Midland is beautiful. I’m glad it is back in use as an entertainment center. Kudos to all those involved in the wonderful restoration.

The Midland was falling apart in the late 1990’s. The Longaberger Company (owned by Tami Longaberger) purchased it (along with the Soldiers & Sailors Theater which was across the street to the right of the Midland) and began the very expensive process of restoring the Midland (the S&S theater was beyond repair and demolished).

I worked for Longaberger as their A/V Manager. The company made baskets (nearly $1B worth of hand-made baskets prior to 9/11) and contributed a lot to the community.

In about the year 2000, the company returned to restoring the Midland. Very skills craftsmen cast molds of the beautiful plaster-work and started repairing everything. Water from the leaking roof had caused extensive damage to the beautiful interior. A former Navy Seabee.. Jim May (Seabees build things quickly for the military during war) was in charge the project. Every stitch of electric was replaced, the roof, stage, orchestra pit, seats fully re-cast and restored, projection booth, balcony, lobby, dressing rooms… you name it, they restored it. There was nothing about the restoration that was done “on the cheap”. They added state-of-the-art stage lighting and sound systems so the theater could be used for stage productions again.

To the left of the stage is three floors of dressing rooms. They restored all this including making everything ADA compliant. Under the stage was an additional dressing room, plus access to the orchestra pit.

After nearly $1M worth of work, The Longaberger Company donated the theater to the city of Newark, Ohio.

It’s an incredibly beautiful “gem” of a restored theater.

On a side note, out in front of the theater is a bronze case of Mark Twain sitting on a park bench.

The credit for that theater all belongs to Tami Longaberger for her civic pride and caring about her community.

I love, love, LOVE the Midland. My first movie memory is going to see a double feature – Bambi followed by The Rescuers – with my mom back in the 1970’s. I cried so hard when Bambi’s mom died, my mom had to take me out in the lobby to calm me down. I remember the staff tried to help my mom and cheer me up, but I was inconsolable.

When the Midland fell into disrepair, I kept thinking it was a magical place and I hoped and wished someone would save it. Thank goodness someone finally did!

I’ve written a Young Adult novel (entitled Not So Long Ago, Not So Far Away) that is currently going through the editorial process on its way to publication. The story is set in 1977 and features a fictional historic theater struggling to survive. My fictional theater was inspired by and is loosely based on the Midland. When I called the Midland to request a private tour during closed hours, they were so supportive and friendly. Please, please, please support this theater. It is a true community treasure!!

By the time that The Midland opened on December 20, 1928, a “talkie” had already been shown in Newark. The Midland opened with a silent film. As part of the celebration, Paramount supplied a release print of “The Shopworn Angel” weeks before its scheduled released date. In 2021, there were no known complete prints of that film in existence.

Part of the extensive celebration of the original opening in December 1928 were the receipt of congratulatory telegrams from such industry luminaries as Charles Chaplin, Buster Keaton, Lon Chaney (Sr.), Greta Garbo, Douglas Fairbanks (Sr.), Mary Pickford, John Barrymore, Ronald Colman and Gloria Swanson. It is assumed that none of these original telegrams still exist.

In August 2022, Chris Skinner, who had served as the executive director for less that a year, has suddenly left his position to fill a similar position at the Schine’s Theatre, also known as The Ashland, in Ashland, Ohio.

Approximately five years ago I attended I Kathy Mattea concert in this lovely theatre. During closed period a barber shop occupied one store front and a musical instrument store the other. Kathy commented how beautiful the theatre was and praised those responsible for its restoration