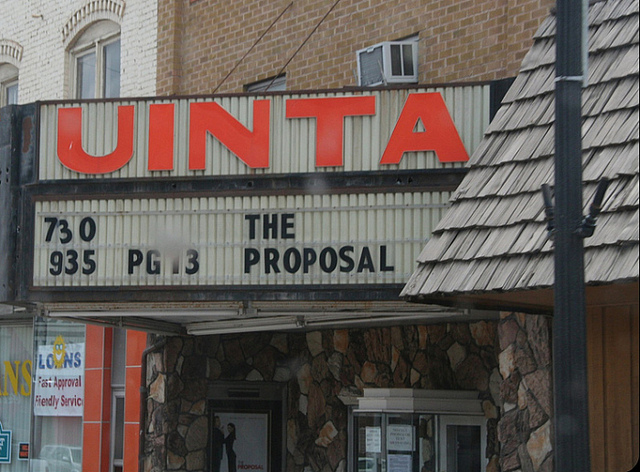 Located a block from the Roosevelt Theatre and operated by the same owner. The New Theatre was opened on June 1, 1925. In December 1925 it was renamed Utopia Theatre. It was remodeled in October 1939. It was closed on July 11, 1946. The Uinta Theatre opened on February 28, 1947. The Uinta Theatre shows first run attractions.

Billboard, Dec. 12, 1977: “John Chasel, who operates the Roosevelt and Echo drive-ins in Roosevelt, Utah, has added a third screen in the town with the opening of his new Uinta theatres. The theatre has 272 seats and will be booked with first run product.”

As For The Roosevelt Newspapers, The Uinta Theatre is formerly known as the Utopia Theatre.

On November 20th, 1930, State Sanitary Inspector C.O. Plokel made a thorough inspection of the Utopia Theatre and was declared to be on equal rights and was known to be one of the best theaters in Utah throughout its “cleanliness”.

On October 12, 1939, major plans were involved to the theater, in which the theater went into a major development with an extensive remodeling project by adding more seats, adding a larger screen, and new projection equipment installation. The back end of the hall was also recovered. Afterwards, the original marquee sign was torn in the spring of 1940, and was replaced with a neon lighting marquee. At the time, the theater was owned by Harrison Enterprises (George and Howard Harrison themselves).

On July 11, 1946, an ultra modern plan was followed in a renovation of the Utopia Theatre is to turn the Utopia into an amusement center. According to Harrison Enterprises on The Roosevelt Standard, they say that the call for an expenditure of $25,000. After completion they replied, “the Utopia will be equally more modern as the nearby Roosevelt Theatre”, which is known to be another popular theatre in the city of Roosevelt. The list contains a similar size and style like the Roosevelt Theatre, with complete remodeled lobby, new lightning, front, treatment for the walls, projection rooms, and Western Electric sound equipment. The company was then planned to reopen the theater in either between the late summer and the early fall of 1947 but the difference is that they switched from 4 days a week to daily.

Unfortunately, the developing planned failed. And as for the theater however, marks the end to the Utopia Theatre’s life. And the day July 11, 1946 marks the day the Utopia closed its doors.

The Utopia Theatre was then replaced by the “modernly new” Uinta Theatre in which opened on February 28, 1947 with future National Broadcasting Company star Red Skelton and Marilyn Maxwell in “The Show Off” along with a Jasper cartoon.

The nearby Roosevelt Theatre went so popular fast than the Uinta Theatre as of June 1954 after the Roosevelt installed CinemaScope and played the most notable CinemaScope beginners film “The Robe” (although its curve screen was installed a month earlier at the Roosevelt Theatre before its CinemaScope installation with the 1954 reissue of Walt Disney’s Pinocchio with a newsreel and an unknown cartoon), though the Uinta Theatre was trying to make it more of a beginners side. The Uinta Theatre then does more sporting events and special features than just original features. Its more like a second-runner, by playing B-graded films while the Roosevelt Theatre struck A-films and mainstream first-run films. At the time, both original operators Howard and George Harrison was then replaced with Mr. and Mrs. Leland Stevenson of Altamont (former operators of Altamont’s Altamont Theatre) on January 19, 1955.