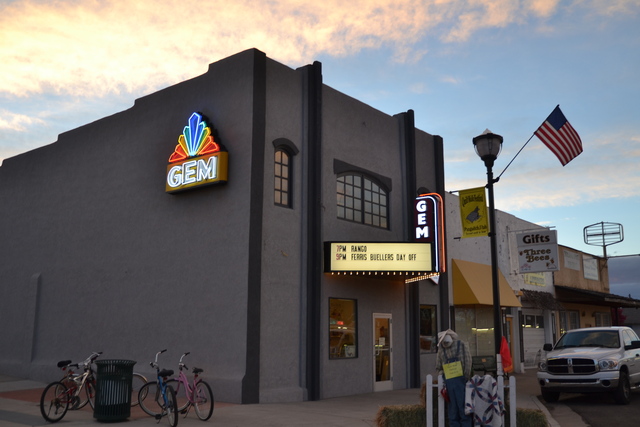 The historic Gem Theatre of Panguitch, Utah, has had a colorful past that spans over the entire century of movie history. Surviving multiple fires, name changes and new owners, after a twenty five years rest, the theatre reopened on Memorial Day weekend, 2011. It’s now ready for lights, camera, action!

Built in 1909 by Myers & Henry, it opened as the Kinema Theatre. The very first ‘picture show operator’ was Otto E. McIff, or ‘Mac’ as he was affectionately called by the folks of Panguitch. The Kine Theatre suffered its first serious fire on February 15, 1924, when one of the reels of film became stuck in the projector and caught fire. Mac tried unsuccessfully to extinguish the fire, and there was not enough water in the town to put the fire out. The Kinema Theatre slowly burned to the ground, leaving only the outer shell of the building.

From the ashes, the Kinema Theatre was reborn and designed to be ‘as near fireproof as possible’. Sporting a more modern Mission-style building front, the Kinema Theatre reopened in May 1924, but had to show movies without sound until a new organ arrived in July.

In 1928, the Kinema Theatre was renamed Hub Theatre. The Hub Theatre had the honor of being the first theatre in southern Utah to feature a ‘talkie’. The first film which stored sound on film was screened in January 1930. The end of 1930 found the Hub Theatre with a new owner and in need of a new manager – Otto ‘Mac’ McIff took another job, and in his place came Millard Hatch. Mr. Hatch and new owner C. Hawks, gave the Hub Theatre a complete makeover and a new name – the Gem Theatre.

Over the next three years, the Gem Theatre was remodeled for better sound effects. A new sound screen was installed, as well as more comfortable seating. The front of the building was remodeled and a balcony was built, giving a seating capacity for 528. Last, but not least, new projectors were installed with the ‘latest fireproof attachments’. As a result, one patron declared the Gem Theatre “the finest moving picture theatre in southern Utah”. For a mere 15 cents, moviegoers could enjoy the latest feature in comfort and still have money left over for some penny candy! Despite the efforts of fire prevention, the Gem Theatre suffered another projector fire in 1934. Thankfully, this fire was quickly extinguished and the movie was able to continue after a short delay.

Over the next twenty years, the Gem Theatre was run by several different families: the Talbots, the Allens and the Wilcoxs. The Gem Theatre began having trouble attracting patrons after the advent of television in the late-1950’s, however, the Gem Theatre managed to stay open until 1984. The last picture shown was “Ferris Bueller’s Day Off”, and the movie title remained on the marquee for the next ten years as the theatre sat empty.

Fast forward twenty-six years – the Gem Theatre, having once again been damaged by a fire, has a collapsing roof and a ‘For Sale’ sign in the window. The Childs family, residents of Henderson, Nevada, had fallen in love with Panguitch and had recently purchased a home in town.

Mark Childs, a contractor, and his wife Heather, a retired dancer, saw a lot of potential in the dilapidated Gem Theatre. In the spring of 2010, the Childs became the new owners of the Gem Theatre. They got right to work, doing research and consulting with the Utah Heritage Foundation to return the Gem Theatre to its former glory – and adding some new, modern touches as well.

As a result, the people of Panguitch have their theatre back…and so much more! Inside the Historic Gem Theatre, movie patrons will find a fully restored Art Deco style 141-seat movie theatre, which also has an expanded stage ready for live stage productions and musical artists. The theatre lobby has been transformed into ‘Scoops from the Past’, a vintage 1950’s ice cream parlor featuring hand dipped, homemade ice cream made right on site. Also found inside is a 1920’s era penny candy store, fresh popped popcorn and roasted nuts.

As guests make their way upstairs to the balcony they will find a 1980’s retro Internet Cafe with free Wi-Fi. For the big spenders, VIP balcony seating is available. Everyone will want to pay a visit to the Historic Gem Theatre museum to see authentic Gem memorabilia.

There is truly something for everyone inside the newly restore Historic Gem Theatre!

I remember standing outside the Gem while passing through Panguitch in 1992,while on holiday in the States from Wales.It sort of reminded me of the one featured in the film ‘The Last Picture Show'by Peter Bogdanovich.

It was closed even back then,so I’m surprised it’s still standing empty after all these years,glad it’s at least still standing but for how long again I wonder ? I’ll have to dig up the photo I took of it as it always rather fascinated me for some reason.

Here is another photo:
http://tinyurl.com/yb4o4rx

My Husband & I bought the GEM this April, 2010.
It is under restoration now to return it to the GEM Theatre, along with a few extras!
By Summer 2011, GEM Theatre will be restored to the 1920, 30, 40 era look. Movies as well as live theatre, bands, etc will be house here.
The balcony seating will return.
There will be a Old Fashioned Ice Cream Parlor in the front, where we will make ans manufacture right on site. (Scoops from the Past)
Upstairs will also have an internet lounge, and a museum of the GEM, Kinema, Hub years. Look forward to bring the GEM Back!

Good luck.guys if i lived anywhere near you all i would be there.

I’m amazed to find the Gem here. I discovered it on a trip through southern Utah in 1992.
It was an October evening, a kid was decorating for Halloween across the street from the closed theater. The whole ambiance was so haunting I wrote a poem about it.
I never thought I would learn anything about the Gem (which I’ve never forgotten) but here it is again.

This site is AMAZING!

A close up:
View link

Best of luck Heather,as I mentioned in my previous post I was quite fascinated with this theatre,I’m sure the locals are looking forward to the opening.

I doubt I’ll be in that neck of the woods again, although I do intend visiting the states again next year,I’m a retired projectionist in a small town in Wale. Hope all goes well for you.

Here are a few pages to keep up with the restoration & Grand Opening events for the Historic Gem Theatre & Scoops from the Past Ice Cream Parlor.

Fantastic to see that the Gem is now once more a cinema, never thought it would when I saw the building back in 1992. Bit puzzled with the entrance though, could that tiny door possibly be the main one ? How do they handle queue’s, or is there another entrance somewhere to the side of the theatre, although none is visible on the google picture above.