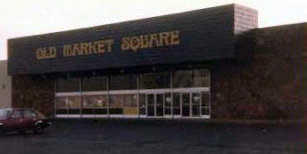 Market Square Theatres opened in the late-1970’s along with the Market Square Mall, which was an old department store. The twin screen cinema was designed by architect Charlie Rice. On August 16, 1985 a third screen was added and a fourth screen opened on December 6, 1991. When the Kenosha County Job Center moved into the north portion, most of the tenants moved out, and the Job Center took over. The Market Square 4 Cinemas closed in 1999.

The theatre portion of the building remained unused and vacant until it was demolished in 2002.

The building was originally a Topps Department Store, sort of like a KMart. I think the theaters were added in the mid ‘70s.

When did the Market Square open and when did it close? Was it ever a sigle screen venture?

For many years there was a small plywood sign made in the shape of an arrow with Market Square Theatres on it at the entrance to the parking lot on Sheridan Road. Did the theater have any other sign or marquee on the exterior of the building?

It looks like the city offices are still in the north end of the mall, but the theater is gone, as Pete pointed out in 2002. Status should be closed/demolished.

at my site www.storesfoever.blogspot.com i have a photo of the theater in the secetion on old market square mall

The building was opened as a Topps Department Store in the mid-1960s, which closed by the early 1970s. As part of several mini-mall proposals within, the MARKET SQUARE Cinemas led the way and opened in the late 1970s; the builder and first owner-operator was Frank Carmichael, Jr. of Kenosha – the architect was Charlie Rice of Racine, Wisconsin – and then the MARKET SQUARE was leased to Doug Porchetta of Milwaukee. The comfortable rocker seats were acquired from a closed theater in Michigan. In about 1990, two more smaller auditoria were added, totaling four in all. When the building was purchased by Kenosha County for office purposes, the cinemas still continued to operate for some years because of the unbreakable lease. When that lease expired, the county wanted the space, and the MARKET SQUARE Cinemas passed into fond local history.

This opened on January 26th, 1979 with Superman playing on both screens. Grand opening ad posted.