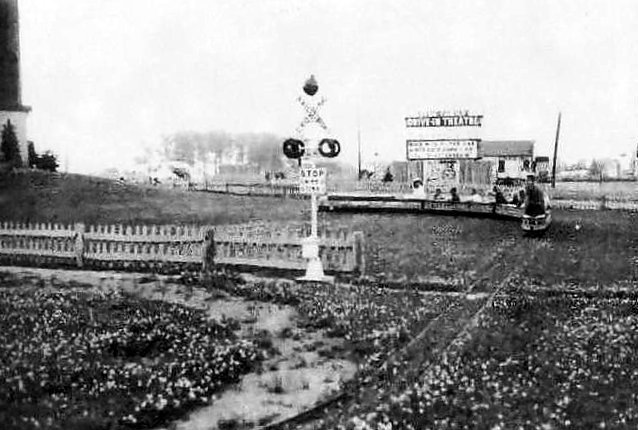 The Keno Family Drive-In opened on May 18, 1949 with Dennis Morgan in “The Time, the Place and the Girl”. It had a capacity for 850 cars. Initially it was a second run theatre operated by the Standard Theaters Management Corp. chain. It featured a miniature railway and pony rides in the play area.

It was the oldest operating drive-in theatre in the State of Wisconsin. The Keno Drive-In showed movies every night from May to October. It was closed at the end of the 2014 season.

Status is definitely now closed. Extremely unlikely to reopen, as property owner has terminated the lease with the company which operated the drive-in, and has publicly stated that it will not re-open. Ever. Plans have been submitted to redevelop the property for retail.

PLEASANT PRAIRIE — The village’s Plan Commission on Monday night voted unanimously to deny alternatives to amend its comprehensive plan, including one that involved a proposal for a “big box” retailer at the site of the Keno Drive-In by property owner Steve Mills of Bear Development to change the comprehensive plan to allow for a 150,000-square-foot Wal-Mart supercenter. T The hearing was preceded by an informal two-hour “open village forum” which drew as many as 100 people, many supporters of keeping the drive-in open. Mills said that while his family enjoyed the drive-in, he acquired the property so it could be developed and said making the drive-in viability would require upgrades that would be “prohibitive financially.” Mills said people who want to support it should put together a non-profit organization, hold fundraisers to prove to donors that it can be viable. “But it’s not the responsibility of me or my family to provide that,” he said. Mills said he would be willing to support the community’s efforts if there was interest.

Eli Shai Riley, who attends LakeView Technology Academy, said he and a group of students have a proposal that would include the Keno Drive-In and want to work with Mills. Riley, Austin Skundberg and Nathan Davis described a plan to have a slightly downsized Keno Drive-In bolstered by restaurants. “We hope to work with Bear Realty to develop the best plan for everyone,” he said.

Joe Mangi, former Kenosha Unified School District superintendent, lauded the village for keeping the community family-oriented, though he said he did not want to see the village without the Keno.

“Why would we give up a 70-year-old jewel … for a big-box store?” he said. “It’s Pleasant Prairie. It isn’t Everywhere USA. Wal-Mart creates blight wherever they go. They’ll knock out the Piggly Wiggly. … They are like an amoeba. We have eight big-box stores in our community already,” he said. “We’ve got only one Keno Drive-In, and that is part of our history.”

It’s very well done … but they list the wrong name on the theatre.

Dave Lounder THE DRIVE-IN THEATRE PRESERVATION SOCIETY TheDriveInGuys.com on November 5, 2019 at 12:27 am

@LouRugani: Mr. Rugani, Are you referring to the ‘Keno’ nickname? Thanks, Drive-In Dave Lounder

Opened with 2 colour cartoons and “The time, the place and the girl”.

Boxoffice, April 1, 1950: “Although crop dusting is an established practice in the agricultural south, Thomas Finin, manager of the Keno Family Drive-In near Kenosha, Wis., applied the technique to his theatre area to rid it of mosquitoes. When the boring insects made it so uncomfortable for patrons in cars they began to abandon the drive-in, Finin employed a local crop spraying form who covers the area with DDT sprayed from a plane flying some 20 feet above the ground. The treatment has proved entirely successful.”