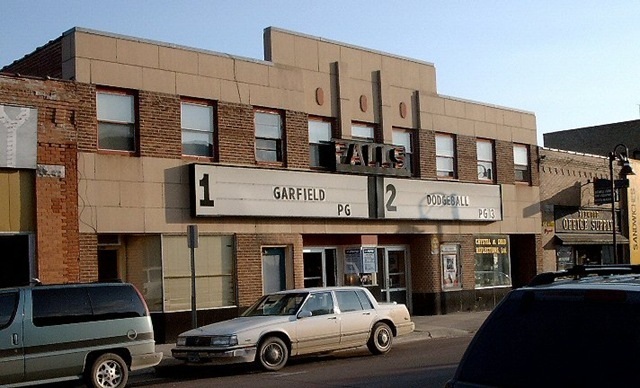 Opened by September 1918 as the New Dream Theatre. It became the Falls Theatre in 1937, it was a single screen seating 677. All information that I found this theatre was always an independent. The Falls Theatre was twinned in 1982, seating after being twinned is listed at 576, and still serves the community of Redwood Falls showing first run movies. It was closed around 2016.

The former Redwood Theatre on Mill Street was purchased by The Redwood Theatre Group, LLC to restore the historic property to an operating theater. At 7:00 pm on December 3, 2015 at the Redwood Falls Library we need a few citizens to “step up” and become directors, (and eventually officers) of “The Friends of the Redwood Theatre.” This will be a not- for-profit group to help us restore our great theatre. Very easy. No investment needed. Limited liability, (no personal financial responsibility) Come to the meeting for a full explanation. We need your help! http://www.sos.state.mn.us/index.aspx?page=1089

Theater is closed, I messaged the owners of the Historic Redwood Theater of Redwood Falls to see if they had any info on this theater that this page is for, besides this theater being closed, there is no facebook page for this theater.

The October 4, 1937 issue of Film Daily had this item under the heading “Change in Ownership”:

The April 11th 1934 Daily had listed the New Dream at Redwood Falls as one of several Minnesota houses that had recently been reopened. A New Dream Theatre in Redwood Falls was also mentioned in the March 6, 1926 issue of Motion Picture News. Going back even farther, the New Dream was mentioned in the September 7, 1918 issue of The Moving Picture World. The 1914-1915 American Motion Picture Directory lists two movie theaters at Redwood Falls: the Opera House and the Redwood Dream Theatre. Whether or not this last was the same house as the later Dream or New Dream I haven’t discovered.

Google Street View of May 2018 shows a 2012 film title posted on the marquee. Might have been showing older movies at the time the picture was taken.