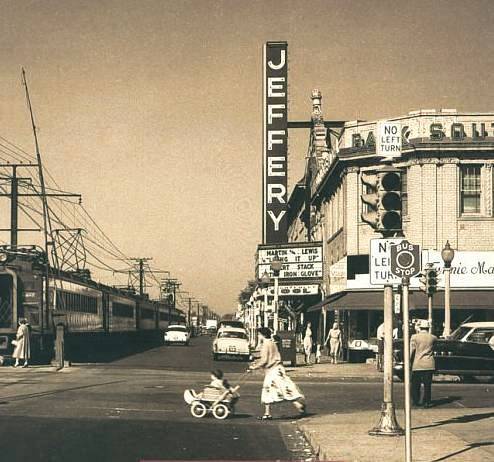 The Jeffery Theater, constructed in 1923 in the heart of the South Shore neighborhood’s then-bustling commercial center, E. 71st Street between E. Euclid Avenue and S. Jeffery Boulevard, was opened a year later as a vaudeville and movie house for the Cooney Brothers circuit.

The Neo-Classical style theater could seat just under 1,800, and was designed by architect William P. Doerr (who also designed the Neo-Georgian style East Park Towers in Hyde Park). It had a tall vertical marquee which rose over the façade of the theater, and could be seen up and down E. 71st Street.

The Jeffery Theater was operated by Warner Brothers in the 1930’s and 1940’s, under a movies-only policy from then on. It was later run by the Coston family, which also operated such South Side houses as the Beverly Theater and the Hamilton Theater.

The Jeffery Theater, a long-time South Shore landmark, was demolished during the late-1990’s, except for its façade and lobby area, which now houses a bank. A drive-up is now located where the auditorium formerly stood. In September 2017 plans were proposed to demolish the remainder of the building to build a Cinegrill on the site. In August 2020 a demolition permit was released for the façade and lobby of the Jeffrey Theatre and the Spencer Arms Hotel.

Silver Screens to Golden Arches… what’s left of the Jeffery will be redeveloped.

Named as one of the city’s ten most endangered buildings by Preservation Chicago. A presumably recent picture is photo #5 of the slideshow that accompanies this Chicago Tribune article.

I can see the residents wanting something more upscale than McDonald’s there. But I don’t understand why the Jeffrey makes any preservation lists. Since they tore the auditorium down there isn’t much left to work with. There must be more important properties than this to focus resources on.

Alisa Starks, who developed movie theaters in Lawndale and Chatham, has been brought in by Monroe Investments to revive the bank at 7054 S. Jeffery Blvd. that closed in 2014.

At a 5th Ward meeting in August 2015 at the South Shore Cultural Center, Starks presented a rough idea for the 46,000-square-foot bank that included a four-screen movie theater on the main floor, a six-lane bowling alley in the basement and a kid-friendly restaurant and play area on the second floor.

Here is a THSA photo of the Jeffery auditorium. Here is one of the lobby.

That is a BEAUTIFUL pic Broan! How did you find it???

Sad story, I get up until he age of 8 on Crandon Ave and 72nd in the 60’s. Lot’s of gang crime even back then. My family belong to South Shore Country Club back them (now South Shore Cultural Center). We would get dropped off at The Jeffery for Saturday matinees and we would be shaken down for money by what I can only assume were very young gang members. South Shore has needed and still needs saving from the gangs running rampant.