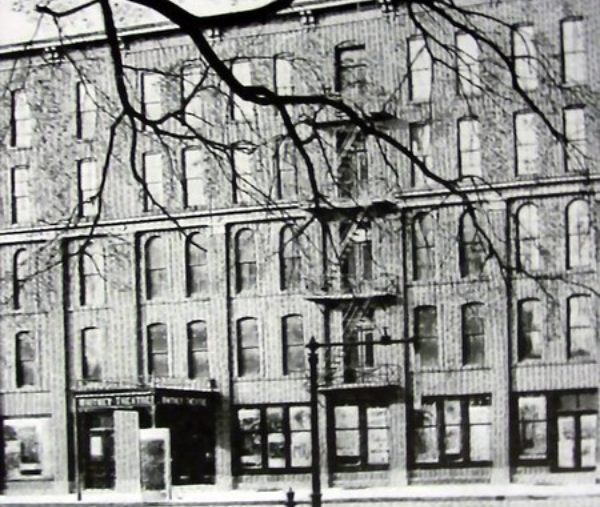 The Whitney Theatre opened in a building which was constructed in 1871, and also contained the Milner (later Earle) Hotel. Its designer was Herman Pipp. The theater could seat over 1,500 in its auditorium, which contained two balconies and 35 boxes.

The decor was neo-Renaissance, complete with imported French chandeliers and Italian marble floors, one of the most plush theatres in the state in the late 19th century, outside Detroit.

For much of its existence, the Whitney Theatre was a legitimate house, with actors such as Edwin Booth, John and Ethel Barrymore, Helen Hayes and Alfred Lunt appearing on its stage.

Although it showed its first movie in 1914, the Whitney Theatre didn’t switch to a movies-only program until the mid-1930’s, when it was run by L.C. Mull, who also operated Ann Arbor’s Majestic Thetare. In 1936, the Whitney Theatre was acquired by the Butterfield Theaters chain, which continued to run the theatre until it closed in 1952.

Three years later, it was demolished, along with the adjacent Earle Hotel. Butterfield Theaters made plans to construct a new 1,500-1,800 seat theatre on the site, but instead ultimately decided to build their theatre, the Campus Theatre, elsewhere in Ann Arbor.