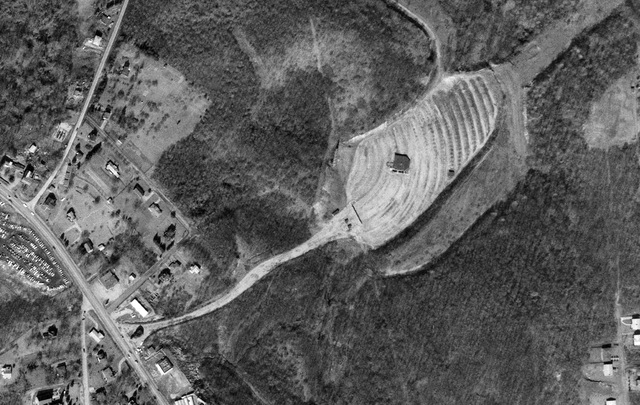 Opened May 25, 1949 with Robert Taylor in “The Bribe”. It was located in Circleville near North Huntington. The Maple Drive-In was one of several drive-ins located on this stretch of the U.S. 30 Lincoln Highway, 4 ½ miles west of the PA Turnpike. Its neighboring drive-ins were the Blue Dell Drive-In (2 miles west of the Maple) and the Super 30 Drive-In (3 ½ miles east).

Wow! This thing was situated WAY back off the road!

I remember going to the maple drive in around the late 1970,s and early 80,s. The screen was down the hill from the entrance and I remember it sometimes would get really foggy and it would be hard to see the movie, lol. I didn,t go to this drive in a lot because I usually went to the Greater Pittsburgh drive in or the Ardmore drive in in the early 70,s. I remember to in the last few years that the Maple was open they would show just pretty much x rated movies, I guess it was the only way the could make money to stay open. It went the way almost all drive in,s are going now, out of business, too bad.

Opened with “The bribe”.