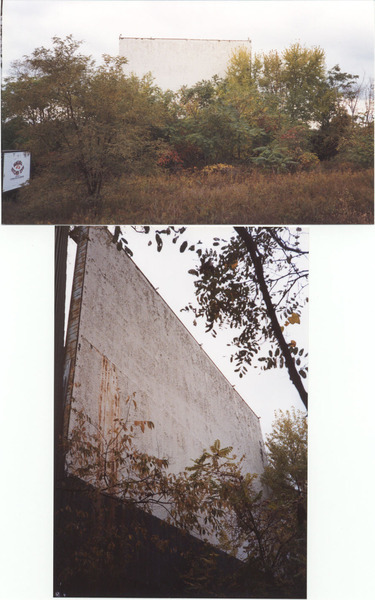 The Blue Dell Drive-In was opened in 1949, and is listed as being in North Huntington Township. It was operated by Norbert & Ernest Stern of Associated Drive-In’s. Closed in 1984, the 500 car capacity Blue Dell Drive-In also had a swimming pool and a diner.

The Blue Dell Drive-In was one of many drive-ins built on or just off of the original Lincoln Highway in Southwestern Pennsylvania; others included Super 30, Maple, Greater Pittsburgh, Ardmore, Twin Hi-Way and Super 30 West. This was also one of several drive-ins owned and operated by the Warren family. One of these, Belle-Aire, was built behind the Blue Dell Pool.

For years after closing, the drive-in screen and sign (as well as the pool sign and the deteriorating pool itself) remained standing. The screen was just taken down a few years ago. Vangura laminating plant now stands on the drive-in site.

One of my favorite places to spend a summer day in the 50s was the Blue Dell complex. We would spend the day swimming (one of the largest pools in the Pgh area), then eat and later the drive-in, preferably in the balcony. The Blue Dells claim to fame was the balcony, a bluff over looking the main section of the drive-in. Snacks were acquired by trips up and down the stairs connection the parts. Nice memories.

There are pictures of this drive-in on its gallery page at Drive-ins.com: http://www.drive-ins.com/gallery/patblu2

First ad appeared on June 10th, 1949 for this drive-in. Aerial and ad in photo section.

I remember going to the Blue Dell in the 1970,s and 80,s. I always had cheap cars and I remember I had to watch how I parked at the drive in because the rows to park where humped up and I would sometime hit my muffler or tailpipe on them, lol. There where a few times when I lost a muffler on the humps and had to wire it up to get my car home. Went more often to the Greater Pittsburg instead. Never went to the Blue Dell Diner but went to the pool a lot, it was a gigantic pool and always had a lot of good looking woman there, hot time in the summertime, lol.