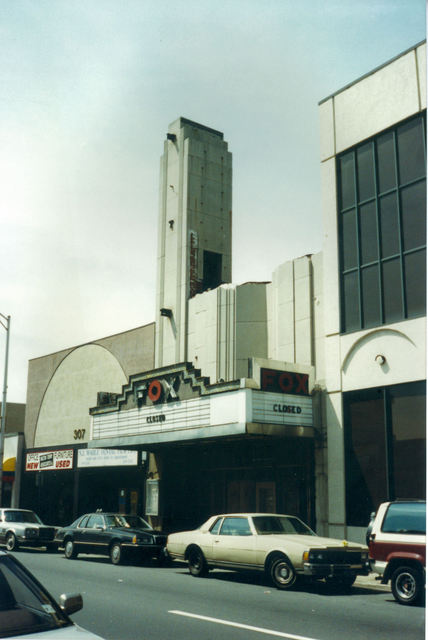 Opened on October 3, 1931 with Jackie Coogan in “Huckleberry Finn”, the Fox Theatre in Hackensack, NJ was a fairly large Art Deco style movie house. The last first-run movie there was “Jaws 2” in 1980. After that, it was closed with an "under renovation" sign outside. It never re-opened and was demolished in 1998.

Hi folks. I honestly don’t understand that 2003 article from the Bergen Record. Demolition on the Fox was actually begun back in 1993! You can see the stripped and decapitated facade at the end of the movie trailer for “Not for Today, But for All Time…” here:

Compare that image to this 1981 photo if you have any doubt:
View link

The shot from the movie trailer is certainly not one of a building undergoing any kind of renovation. Can any northern NJ residents shed light on this?

The Fox was closed for a number of years; I seem to recall it did open, but only for one night only closed-circuit sporting events, like fights, etc. After Jaws 2, I don’t recall it being open on a consistent basis. The theatre was to be torn down and another building was to be put up, but there were many delays and the theatre just began to rot away. Today there is absolutely no trace there was ever a theatre there; same with the Oritani, which was across the street.

I too saw jethro tull at the old very small fox theater in hackensack nj back in 1971. We had second row center seats, truly amazing concert and experience. One of those things you never forget.

I saw “The Jerk” (1979) there in June of 1981 so it was operational until at least then. It was never twinned. It had a very long entrance hall as I recall. The space is now a parking lot.

As one of murray Spectors last assistant managers at the Fox My thanks for the posting of the box office article. mr Spector, an old vaudeville man himself, was a true showman as that article oroves. I was there as a relief manager before being promoted to manager and moved to the late great colony theater . Did you know thw Fox had a two room walk in bank style vault in the managers office ?

The Fox Theatre was an amazing place. My father was the Manager for many years and I worked there as an usher while in high school. I can remember many live concerts including Jethro Tull, U2, Santana, Mountain, etc. I also remember when Muhammad Ali showed up on a bus tour promoting one of his fights which was being shown by closed circuit TV at the Fox. Great memories.

I met my first wife at the Fox in 1966 and I owe it all to Mr. Spector, the manager. She was then Marie Bassano and she worked at night selling tickets in the kiosk in front of the theater. My friends and I would “cruise the drag” at night and one night I saw her in the kiosk. I caught her eye and she smiled. Eventually I got the nerve to talk to her while she was selling tickets and every few minutes Mr. Spector would walk out in his tux to check on her (and me),so to avoid being chased away I’d have to keep buying tickets. Even at 25 or 50 cents a ticket it cost me more than a dinner just to talk to Marie. I always felt that I single-handedly subsidized the theater for at least a year! If it had not been for the Fox Theater I’d never have met my beautiful wife of 25 years! 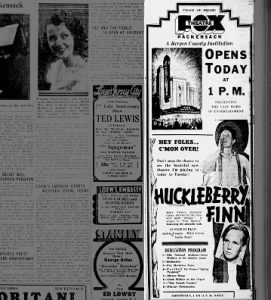 First movie I saw here was Mary Poppins about Christmas of ‘64.Then SOM summer of '67 on the film’s first Jersey non reserved seat engagement roll out. Maybe it had just ended its 2 year run at the Bellevue in Montclair. Also war movies like Patton and Midway. I also saw Rollercoaster in Sensurround. Others as well.

Airport played at the Oritani which I saw there after seeing it at Radio City. As opposed to the art deco Fox it was rather detailed ornate in the 20s fashion but at that point very shabby unlike the Fox whose interior which was maintained and quite beautiful and designed with gorgeous concealed lighting to show of its detailed art deco craftmanship. Look at the black and white interior photo and imagine it colorfully lit. One thing one does not get when looking at the interior photos of these theater at their completion is how beautifully they were lit. Certainly a lost art when they are restored. It’s usually lights on/lights off.