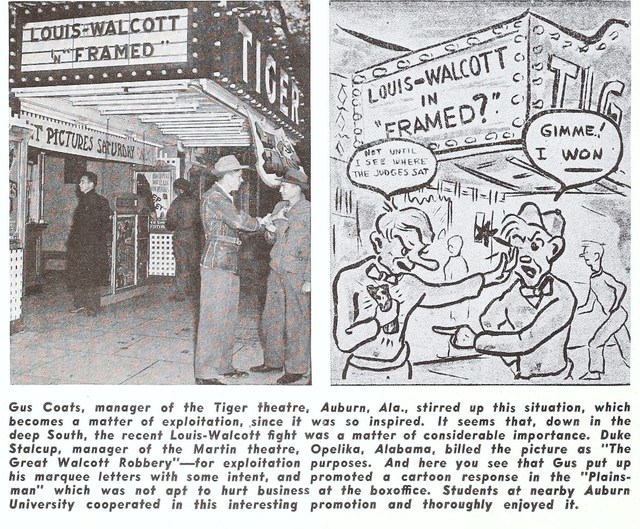 The Tiger Theater opened September 6, 1926, and was still operating into the early-1980’s.

Very sorry looking marquee for a PLITT theatre!1981 picture. It was Plitt Theatre in 1983.Summer movie prices here will be $2.00 and $4.00 a seat this from the Knoxville District.

A history of movie exhibition in Auburn from 1894 to 1928, written as a thesis by Auburn University student Danielle E. Williams, has information about the early years of the Tiger Theatre (PDF here.)

The Tiger Theatre was opened by F. A. Rogers on September 6, 1926. It was the first regular movie theater in Auburn, though movies had been shown in the college auditorium at lest twice a week (Friday and Saturday nights) under the auspices of the local YMCA since 1912.

The College Picture Show, as the YMCA program was called, continued to operate for two years after the Tiger Theatre opened, finally suspending operations in September, 1928.

The Tiger Theatre had a Reproduco organ to accompany silent pictures.

A master list of buildings designed by Birmingham architect D. O. Whilldin compiled by Thomas M. Shelby lists the Tiger Theatre in Auburn as one of his projects. However, it is listed as a 1927 project, so perhaps Whilldin only designed some alterations the year after the house opened.