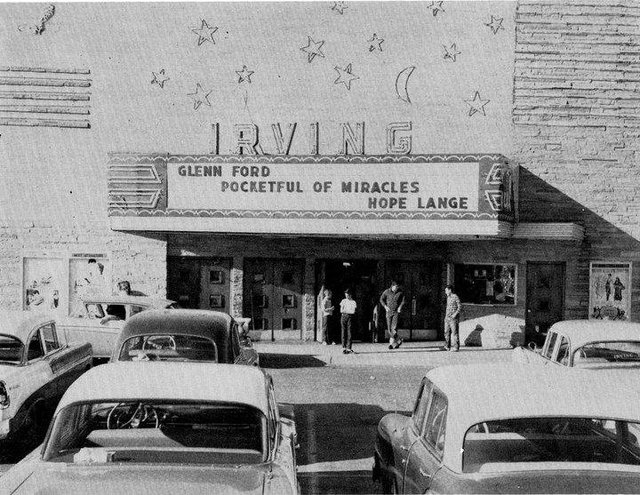 The Irving Theater was opened in 1939, replacing an earlier Irving Theater. It was closed around 1974. The building is currently being used as an auto repair shop but is easy to identify as an old movie theater. The marquee has survived and shelters an outside ticket booth and glazed tile entrance. The structure which appears to be in good condition is constructed of brick and sandstone blocks.

It was my mistake; it was late and I was excited. Very sorry, nice to chat with you just the same.
Thanks

I grew up in Irving, but sadly wasn’t born until this theater was closed down. Until tonight, I didn’t even know there had been an old theater in Irving. There is a nonprofit called the Friends of Irving Theater and they are trying to purchase and renovate the theater to be used as a community arts center. They have a couple of old pictures with the original marquee. Check it out: http://friendsoftheirvingtheater.com. You can also like the group on Facebook.

My name is Doug Connolly, and I am the Executive Director of the “Friends Of The Irving Theater,” a grassroots non-profit organization whose goal is to purchase, restore, and reopen the old Irving Theater! FOIT’s website is at: FriendsOfTheIrvingTheater.com and we also have a very active Facebook Group. The theater at 717 East Irving Blvd is indeed the Irving Theater. However, the original “Irving Theater” was on Main Street in old downtown Irving, but closed before this theater was opened in 1951. This Irving Theater is the Movie Palace that is remembered by the “baby-boomer” generation (like myself) as the home of the historic “Saturday Kids Matinee” where 6 Pepsi bottle caps got a youngster free admission to see 2 features with a twenty minute intermission. During the intermission there was games like hulahoop, limbo, & dance contests, all with prizes donated by local merchants! The theater ceased operation in 1967 because of competition from the Irving Mall Cinemaplex and other more modern theaters in the area. Before closing, the owner Jerry Meagher tried a number of different marketing ideas like $1.00 movies, but the theater closing was a sign of the times. FOIT wishes to reopen the Irving Theater as a multi-venue entertainment center, showing not only classic movies, but booking national regional and local acts, corporate conventions, civic meetings, dance and music recitals, weddings, and of course Spanish films and acts for Irvings large Hispanic population. FOIT is a true grassroots organization, wishing to see the Irving Theater reopened for ALL OF IRVING! For More Info or donations please go to our Facebook Group, our website, or call Doug Connolly at 972-415-3662. Sincerely, Doug Connolly, Executive Director, Friends Of The Irving Theater

Looks like the Irving Theatre is going to be revitalized!! Good luck!! Looking forward to some updates how this goes!

I notice the site for Friends of the Irving Theater says they have received the gift of 500 theater seats from the Buena Vista theater. Where is/was the Buena Vista? A CinemaTreasures search turned up only one Buena Vista, located in Tucson AZ.

Diapason, the Buena Vista Theater operated from the late 1960s to the early 1980s. It closed because of competition from the multiplex in the Irving Mall and other theaters around Dallas. The Buena Vista then was converted to a “live theater” fpr plays, musicals, and as a rentable auditorium. However, that even changed when the Irving Arts Center was built. It is located across from MacArthur High School in the MacArthur Medical Plaza, but is soon to be demolished to make way for assisted living condos for seniors. “Friends Of The Irving Theater” was allowed to pull all of the 500 seats out (& what a job it was!)and we put them in storage until the day we can purchase, restore, and reopen the old Irving Theater. Thanks for your question and checking out our Website!

I lived in Irving from about 1948 until 1981, and I saw many movies in both theaters, the one on Main Street, and the one on Irving Blvd.

You may not know this, but there was another movie theater in the early days located just up the street (north) on the same side as the Irving Theater. It was called the Rio and burned down sometime I estimate in about 1949 or 1950. The lot there was never built on after the Rio burned. What I remember was that the inside of the theater was lined with open flame gas heaters to keep the audience warm, as it seemed to be a lot colder then in winter than it is now. That’s probably why it burned. And it’s a wonder we didn’t all die of carbon monoxide poisoning.

This facility replaced the former Irving Theatre on Main Street which had opened in September of 1924 likely on a 15-year lease. Owner Hans Smith opted to build the New Irving Theatre, a streamlined moderne facility, launching in 1939. The 600-seat house’s interior and at least one wall was decimated by fire on August 7, 1941 and rebuilt with a new interior adding 40 feet to the structure as a 730-seat theatre relaunching in the Fall of 1941. Purchased by the Meagher Circuit in 1959, the theatre was redecorated. Meagher closed the theatre in 1972.