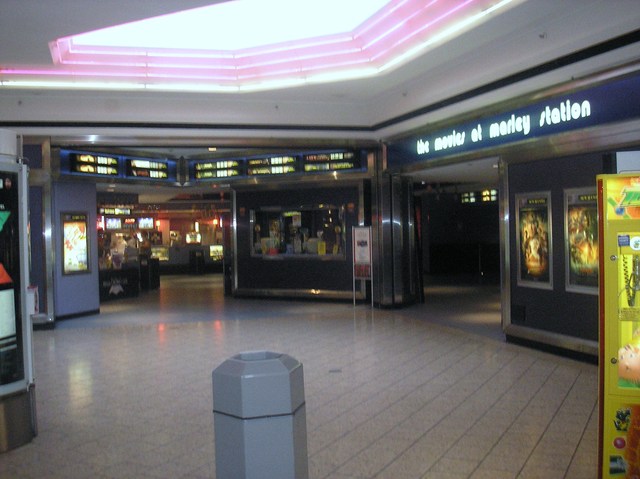 The Movies at Marley Station opened on Friday, June 5, 1987, with a brace of features including "The Untouchables." Seven of the eight screens are typical 1970s-1980s UA "shoeboxes" (oblong rooms with one aisle down the middle), while auditorium #5 has a more traditional two-aisle, three-section layout. UA Marley, like its sister at Golden Ring, had a long run of "Rocky Horror" (1987-1992).

This theater seemed to still do well, despite the presence of two relatively nearby megaplexes (Cinemark’s Arundel Mills and Northeast Theatres' Nursery Road). The Movies at Marley Station was closed on February 22, 2014. It was reopened by Horizon Cinemas on June 20, 2014 as Marley Station Movies.

Theater #5 was definitely the big one and it always had a peculiar smell, like moldy bread. Never did find out why. Maybe it still does. I had completely forgotten about the Rocky Horror screenings.

Scraggler: A Sbarro pizza shop is adjacent to that auditorium. Perhaps that is the source of the smell.

I visited this theatre a few days ago. Looks pretty much the same as it did in the UA days. The original box office is closed; one now buys tix at the concession stand. The stand itself is half as large as before, with the other half now occupied in part by a popcorn-butter dispenser.

The auditoriums have been re-numbered: 6 through 8 are now 1 to 3; #4 is the old, large #5; and the old 4-3-2-1 are now 5-6-7-8. New #8 (old #1), the smallest house, has been remodeled, with the UA “shoebox” seating arrangement replaced with continental seating (eliminating the center aisle). 8/1 is larger than I remember, and now has Dolby Digital front channels only (no surrounds). (UA’s 1-2-3 and 8 were mono in the 35mm era.) #1 (old 6) also has new continental seating and full Dolby Digital with surrounds. The decor of the auditoriums has been changed as well, and there are reclining seats.

The place was very quiet for a Friday evening: the two showings of “Rocky Horror” I attended drew a grand total of 24 people, very unusual for a Halloween weekend, and far fewer than Marley typically had during the movie’s 1987-92 run there. The picture playing across the hall also seemed to have a tiny crowd. A shame, as prices under Horizon are much lower than at the Cinemark Egyptian: $9 top adult price, $6 matinees, plus a $3 upcharge for 3-D. Most Wednesdays, adult prices are $6 (and the upcharge). Concessions, which stick to the basics, are reasonably priced.

Marley Station itself is considered to be a dying mall. Restrictions on “mallrats,” and a 9 pm closing time, have reduced warm bodies considerably. The movies are overshadowed by Cinemark’s Arundel Mills monsterplex and its modern frills. Horizon Marley still is a nice place to see movies.

I probably have not been to this theater in 20 years since I moved out of MD. The last movie I saw there may have Jerry Maguire. And when I visit, if we’re seeing a movie, it’s usually at a newer theater.

I am so happy to hear they’ve kept the layout basically the same. So many great memories. In the early 90s I used to wake up on Saturday mornings and go to the 10AM first showings, usually of a movie nobody wanted to see with me. Things like No Escape (Ray Liotta) or even D2: The Mighty Ducks.

I sure remember the big theater, the old #5 it seems. Seeing Mrs. Doubtfire, Wayne’s World, The Addams Family, Nightmare on Elm Street 4 and Freddy’s Dead: The Final Nightmare. Smaller theaters too for movies like The People Under the Stairs, Baby’s Day Out, The Net, Getting Even with Dad. Not all classics, but I saw everything back then.

I’d heard the mall became a rather dangerous place with gang activity. Has that been curbed with the new restrictions? It’s amazing they still show Rocky Horror. Wonder if that’s still on 35mm or a DCP now. Thank you all for sharing this information, and that photo of the lobby makes me wistful.

I just went back to visit MD and I went to a movie at Marley Station for old time’s sake. I’m happy to report that it is mostly the same as I remember: the long hallway to the theaters, the tile in the concession area and even the bathroom are frozen in time. I got a peak in the big theater (now #4) at the end of the hall and it looks identical, although rather empty even for a 7PM show of Captain America: Civil War since the mall seems to be dying and not attracting customers. I think theater 3, the only one that takes a turn before seating, is still the same, but I can’t be sure.

All the other theaters on the side have been redone by Horizon (unless UA did it before). For some reason they’ve opted with a layout with all the seats in the center. I recall those side theaters each having an aisle down the center and rows of seats on either side. Again, I could be wrong because it had been 20 years, but those are my recollections.

There is a wall up in the lobby to cover up some of the cleaning areas behind the concession stand. It used to be an L shaped counter but there’s probably no need for four cashiers at the theater anymore. I took a bunch of pictures I’ll try to post soon.

Finally uploaded the photos I took from my May visit to Marley Station Movies. I think you’ll all recognize the hallway and tile. Only got one shot of one of the remodeled theaters though.

This opened on June 5th, 1987. Its grand opening ad can be found in the photo section. and below.

One thing I forgot to mention was the theatre’s original marquee. It was a large Digi-Dot display that could be controlled from the manager’s office – no climbing ladders to change the letters! It lent a little more prestige to the theatre. Sadly, it started to malfunction only a few months after opening, and was never fully repaired.

Also, this was the first theatre I ever saw where the signs outside each auditorium had Mylar inlays with the films' title logos, instead of regular lettering. Another quality touch that’s now standard in even the bargain houses.

Visited this week and an employee told me they could be only two months away from renovating with recliners. New pics including the new monitors in the hallway and better shots of lobby and box office.