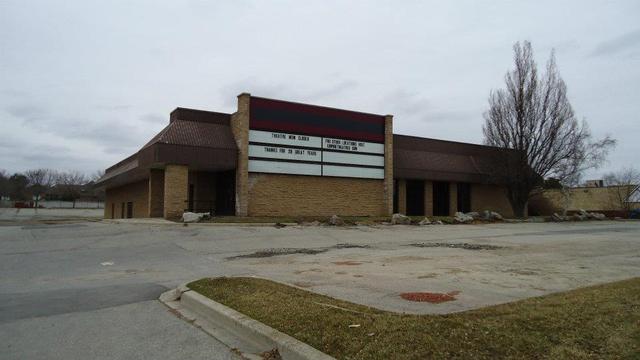 The Showcase Cinemas was located in Burlington Ontario, just north of the Burlington Mall. This theater has a giant painting on the walls lobby that has scenes from different classic movies from the 1930’s to the 1970’s from "The Wizard Of Oz" to "Star Wars".

It was opened on March 6, 1981 as a Canadian Odeon theatre. Taken over by Cineplex Odeon in 1984. Purchased by Empire Theatres in 2005 when Cineplex Odeon merged with Famous Players in Canada. It had over 1,000 seats in the six auditoriums, and the facility had parking for just over 400 cars.

It is a shame. As I think the Showcase has a couple of screens with DTS and another two with Dolby Surround and ample parking. However, it was always a poor location for a theater and who knows what the tax rate is on the large parking lot.

It has been showing mostly second run features the last few years. However, they were the only cinema in the Hamilton/Burlington area, except for possibly the Westdale and maybe the Movie Palace, that showed art-house movies. I saw Sharkwater and JCVD at Showcase, they didn’t play anywhere else in the area as I recall.

I’m not sure about Encore taking it over as the Showcase might be too close to their Oakville Mews cinemas for first run features and is definitely too close to their Upper Canada Place cinemas for second run. In fact I got a recent e-mail from Encore looking for people to join a club so they could convert one of the screens in Oakville to digital so they could show 3-D movies, so I doubt they would be very interested in the Showcase.

As for Upper James, well that’s a head scratcher, as the theater is only 10 years old, with ample date friendly restaurants nearby. A friend said she was told that Cineplex plans a Playdium type complex there, but I was hoping Empire would take it over.

As the CEO of Encore Cinemas, I can tell you that we not only would have taken over the Showcase, but we actually made a formal bid to purchase the theatre in 2005 when the Government of Canada sanctioned the monopolistic purchase of Famous Players by Cineplex. The peace offering that Cineplex made to the pointless Competition Bureau to get permission to create the massive CineFamousPlex was to sell off 35 of their theatres (mostly crappy locations). We bid on the Showcase and lost out. In the end, Cineplex decided to sell the entire package to Empire Theatres and not to sell off individual properties.

We had continually reminded Empire of our continuing interest in acquiring this location so it came as a complete shock to us that the staff were told on Friday that the theatre was closing Sunday. Apparently the property has been sold to a neighboring land developer to build more typical Harvester Road commercial space.

Oh well, while we are very disappointed to see this theatre torn down, it can only be a good thing for our current Burlington location where we have recently renewed our lease.

By the way, the theatre originally built and opened by Canadian Odeon Theatres in 1981 (approx). It, along with the rest of Canadian Odeon locations, were sold to Cinplex in 1984. Cineplex ran it through to 2005 when it was sold to Empire.

I always found some of the theatres sold to Empire to be very curious indeed. How for instance was Cineplex able to keep BOTH the Devonshire Mall cinemas and SilverCity Windsor which are very close together and more or less show the very same films. Also why would Cineplex give up the Coliseum Calgary which is one of their very own brands to Empire? It’s like in the U.S. when AMC took over Loews Cineplex and had to sell off certain theatres, they kept BOTH the AMC River East 21 and the AMC Loews 600 North Michigan 9 which are mere blocks apart and now dominate the downtown scene in Chicago.

Good question Tim, there is a possibility of high rent was the reason Coliseum Calgary being sold to Empire.

That may be the case. I’ve always wondered about that since “Coliseum” was such a signature brand with Famous Players, I would have thought that Cineplex would have wanted to keep all theatres with that name.

Didn’t the Coliseum Calgary was renamed Studio 10 by Empire? As far as I know one of the reason Cineplex bought Famous Players besides making themselves bigger was the Silvercity brand because they are ubiquitous and well known. Since Coliseum along with the Colossus are smaller brands within FP, Cineplex sold the Calgary location. Since Cineplex have too much brands already, the Silvercity name is the third active brand along with Cineplex Odeon and Galaxy Cinemas. I highly doubt Cineplex will be using the Coliseum and Colossus brands in the future since there are smaller number of locations of them. Cineplex still keeping the old names on the theatres but not using their brands in future projects, since they are already well known.

@Kuckyjay: Your friend maybe right on the Upper James cinemas converting into an arcade/entertainment complex. Recently, Cineplex have announced their Silvercity Newmarket location will have 3 of its theatres turn into a giant arcade center called “Xscape”. Here is the press release. www.au.sys-con.com/node/922858

@Jeff Knoll- Thanks for that information on the Showcase and its correct history. I apologize to you for my obviously wrong assumptions about Encore’s interest in Showcase. I wish you had been successful in acquiring the Showcase. I think the value that your Encore Cinemas provides movie fans is great.

I thought it odd that Empire was running a second run theatre too. Was it part of the agreement with Cineplex to keep it second run? It must have been frustrating to not have been able to purchase it, but I’m glad to know that you tried and kept on trying until it was closed. However, I’m more excited to read that Upper Canada Place will continue. I love that place, even when it was a Cineplex.

By the way, I was at the Showcase on closing night and took some pictures, the ones of the theatres were less than impressive, but one of the shots of the wall mural came out decent enough. Well I’ve got to go watch the Avon Theatre’s marquee continue to deteriorate until it falls off.

As of December 2011, the Showcase theater building has been demolished.
Near the end, the place was a little run-down. The last time I was there, the tiles in the washroom entrance were broken and loose, the auditorium door hinge was broken (so they left the door open while the film played) and they played a local radio station during the intermission and left the radio audio on while the film played…how professional…I thought I could faintly hear something, especially in the quiet, silent portions of the movie. A bad end, but they were very good theaters. There was a lot of parking around the building, and I remember the mural in the lobby.

As for the Upper James Cinemas (which are not in the Hamilton listings), the building has been converted into a Marshall’s store. This happened in late 2011. The store is now open.