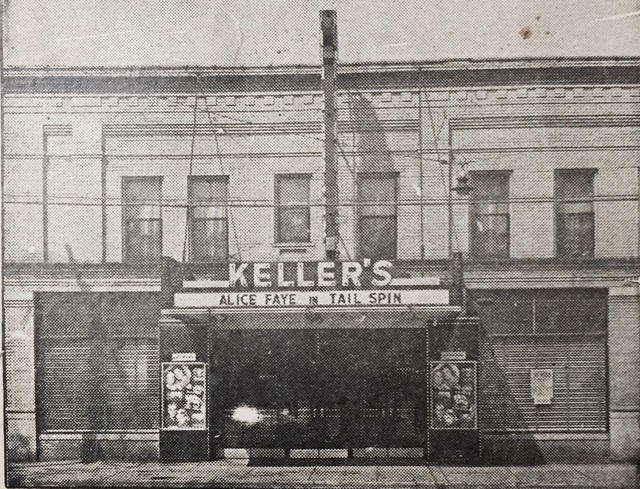 This theater was built in 1914 and remained open until the late sixties. It was a small town theater that provided entertainment for several generations in North East, Pennsylvania.

After its construction in 1914 another theater in North East called the Mills Theater provided a few years of competition for Keller’s, but for the most part Keller’s was the only movie theater for this town and provided service 7 days a week for over 50 years.

After the death of one of the original owners it passed to one Frank Keller who renamed at the theater after his grandfather Harry Keller who had been a magician. The theater was equipped for both screening of movies and stage shows. The local volunteer fire department raised money annually by staging minstrel shows.

A feature typical of movie theaters of the 30s and 40s was "Dish Night" and Keller’s was no exception. There was also "Bank Night" where a name was drawn to win $50. One had to be present to win, and if no one could claim the money it was raised $25 more.

This was a very popular feature that drew capacity crowds in the 1950s partly as a way to compete with television. It was continued into the early 60s but the competition from theaters in nearby Erie as well as from drive-in theaters constructed in the 50s gradually caused a decline in business.

A temporary closing in 1962 was followed by a purchase by a local theater chain called Blatt Brothers. Apparently unable to keep the theater open, the owners sold the building to the neighboring Baptist Church. It closed in 1967 and was razed in the early ‘70s.

“This was the theater of my childhood and as such it is the one theater I think of most when I think of moviegoing. It was there that I first saw the Three Stooges, Tom and Jerry Cartoons and first tasted Cremesicles. It was a place where singularly pleasant memories were made. I will never forgive that church for destroying that theater.”

In place of the old Keller’s Theater, church officials “…erected a sterile, characterless structure as an add-on to their church which was located next door to Keller’s. It was often said that life in this nondescript Pennsylvania town was dull and uninteresting enough–when Keller’s Theater was torn down life in that town became even duller.”

David: You seem to have more knowledge of this theater over many others and I just wondered if you are or were from that area of western PA?

Would love to see a photo of this theatre!

Would still love to see a photo of this theatre!

Lost Memory: Interesting to learn that this small town theatre once had an organ! I grew up near this theatre, but never went there as a child though know exactly where it used to be.

Still hope to see a photo(s)!

My family managed the Keller from 1962 to 1964. We lived in the apartment upstairs with Vern and Cecelia the cleaning people and another family with kids whose name I forget. Our apartment was on the right over the TV shop. There were small storage closets in the back of the second floor where I and the other kids played, plus a fenced backyard where we kept our dog, Boots. I went to 1st and 2nd grade at Heard Memorial grade school. My teachers were Mrs. Pulling and Mrs. Reid. The principal was Mr. Sherrieb. I have some memories that I can share if you email me at Also possibly some pictures of the apartment but alas not of the theater. Max Summerville

max3: I just read your Grand Theatre post and now this one as the 2 theatres weren’t many miles apart in NYS and in PA. Great memories and I so wish that both these theatres still existed.

It would be nice to be as wealthy as Bill Gates, that way I might be able to have some architect draw up a replica of Keller’s, pay off the Baptist Church to “get lost”, tear down their ugly building and rebuild Keller’s Theater.

That would be a nice idea though I wouldn’t go so far as to tell the Baptist Church to “get lost”. Yet having said that I, along with many others, probably don’t appreciate the fact that the church demolished that theatre which was then lost forever. I grew up in nearby Westfield and have memories of the former Grand Theatre which is also lost forever!

Small correction: Harry Kellar, known as the dean of American magicians, never had any children. Frank Keller was Harry Kellar’s nephew, not grandson.