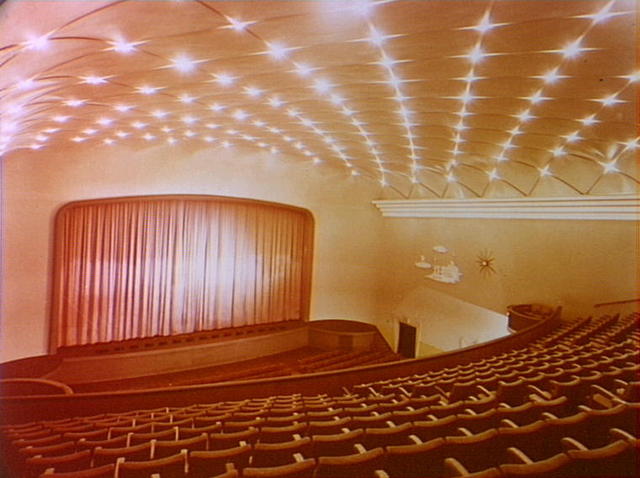 Located in the coastal town of Wollongong, south of Sydney. The Regent Theatre was first planned in 1935, but after considerable delay, followed by World War II and further delays, construction didn’t begin until February 1950. Even then work on the building was slow, and it eventually opened on 5th April 1957. Seating was provided in stalls and circle levels. There are plaster mouldings on each of the side-walls which depict mythological scenes. The trough surrounding the proscenium originally contained concealed lighting. The ceiling has a criss-cross of lights representing a starry sky (although this is not an Atmospheric style theatre). There is a fully equipped stage which is 45 feet wide and 16 feet deep, and several dressing rooms. It is one of the few remaining historic buildings in the city.

It was equipped with 70mm projection in October 1967, when “My Fair Lady” was screened in the Todd-AO process.

In 2002, the 1,630-seat Regent Theatre was being threatened with demolition by Lend Lease, a local "speculator" and developer who proposed razing the opulent theater and erecting a supermarket and commercial complex in its place. The opulent movie house is also a beloved local treasure and residents banded together to fight the proposed devlopment.

The National Trust immediately swung into action by preparing a statement of significance for the building, and giving the Regent Theatre an interim listing on its Register.

After closing as a cinema in January 2004, following the death of the owner, it was purchased by a church. By March 2010, the church had vacated the building and it was ‘For Sale’.

This property is advertised for sale in the SMH today. Tenders close 30 November 2004. Details: .au[/email] or call Australia 0411 723 470. Obviously, LEND LEASE the company that owns the property (and adjacent mall) are worried about a possible Heritage Order. Exterior. entrance & foyers are the greatest attributes – the huge auditorium could be subdivided into multiple screens as is rather bland.

Has anyone heard what is going to happen to this theatre

The Regent Theatre is currently a Pentecostal Christian Church. I am not sure if they bought the site as it was for sale in late 2004. However, The Sydney Morning Herald dated Sat June 11th 2005 ran a freature article on Marion Best the interior designer whose colour scheme, lighting fixtures and rich decor is now recognised as the only cinema in Australia with its original work of hers all completely intact. A pic of the front revealed the movie times sign now reading: Church Services here now. The mega mall shopping complex next door had its expansion plans erased….
Re: Mr Edwards comment above that the interior is rather bland and could be cut up: tiresome negative and ill informed comments like that only de value this glorious theatre, which only helps heritage vandals get cinemas like this demolished at some stage. Really the Regent should still be screening films but at least as a church, it is intact and not tripled or demolished.

I visited Wollongong at the start of 2007 and had tried to leave a comment here, but maybe I had not gone through the correct procedure, anyway, I used to live around the corner from the theater on Smith street one block away from Keira street, and I have to say my earliest memories as a child growing up were of this theater and seeing films at that point in time, when most of the buildings around it looked similar to the theater itself and at the time crown street was a road for cars and not the paved over mall it is today, I very upset to see this theater gone as it was a rich cornerstone of my imagination growing up and I still have fond memories of it to this day..

The Regent Theatre is up for sale again as of Monday March 15 2010. It is currently used as a church.

I don’t know what was going on in 2010 but the Gateway City Church is still occupying the Regent for services and has just signed a deal with the Wollongong Conservatorium to put on regular shows – Jimmy Morrison first up.

Regent interior photos are from the collection of the Wollongong City Library and Illawarra Historical Society. Thank you Lisa!

One of the best cinemas in the Wollongong area! My first film seen there was MY PRIVATE IDAHO and last was DARKNESS FALLS. Attended a fun screening of ALIENS during a Halloween movie marathon in ‘92. Seen the TITANIC, FARGO, INDEPENDENCE DAY & SPEED there. The last film screened was THE MASTER & COMMANDER according to the local paper the film received at standing ovation when the final credits rolled since they knew it was the last time a film was going to screened there. My sister and I went past it on a Friday nite and the interior looked the same but messy cuz it was a church youth night nite…please someone buy this place and restore it back to its former glory!

Sold in february 2020. Buyers unknown at this stage? Use unknown, but may be restored to use as a theatre?