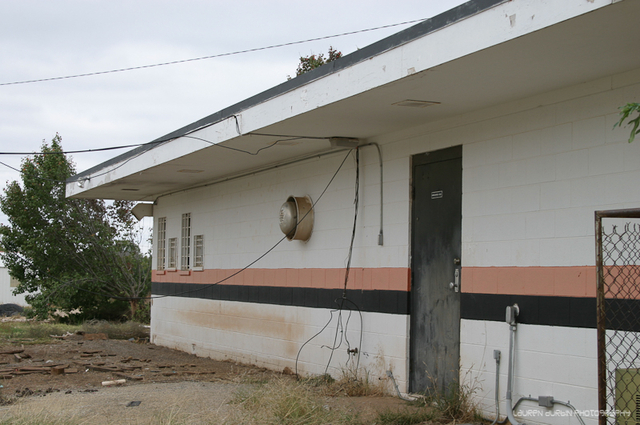 The North 177 Drive-In opened on September 5, 1968 and was operated by Video Independent Theatres. The following comes courtesy of roadsideoklahoma,
Notes: "Some of the North 177 Drive-In is still intact. After its final days as a theater, the lot was used as an amusement center called Cowboy Sportplex. Batting cages and a driving range were built on the lot. The concession stand/projection booth remained as the amusement center’s central building. The marquee sign also remains along with parking ridges and entrance road. The sports complex has now suffered the same fate as its predecessor and is deteriorating."

This link has recent photos of the remains of the former Norht 177 Drive-In,
http://www.roadsideoklahoma.com/node/182

A more accurate address for this theater is 5020 N Washington St, Stillwater, OK 74075. This points directly to the entrance road. The entrance is now the entrance road for Patriot Storage. The residences west of the storage center are where the actual drive in itself stood.

Note: The sports complex is actually NE of where the theater stood next to the dam.

Boxoffice, Sept. 30, 1968: “STILLWATER, OKLA. - Video Independent Theatres opened its new 177 North Drive-In on Highway 177 north of town on September 5. The ozoner has a 428-car capacity and the very latest in equipment. Video also operates three conventional theatres here, the Leachman, Aggie and Campus, and another drive-in, the East 6th Street. Paul Gay is city manager for the circuit. There was another drive-in, the Moonlite, also operated by Video and located within the city limits, but which has been dismantled.”