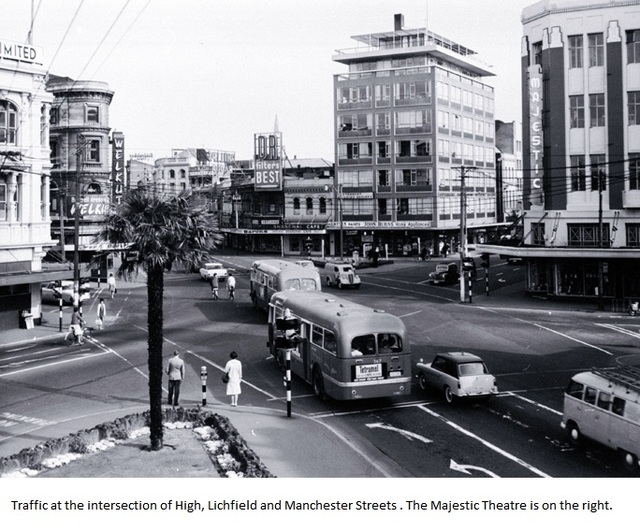 Located on the corner of Manchester Street and Lichfield Street. The Majestic Theatre was opened on 1st March 1930. It was built for John Fuller & Sons and was leased to Christchurch Cinemas Ltd. Billed as ‘The Showplace of Christchurch’, the exterior in an Art Deco style contains three floors of offices, known as Majestic House. The interior of the cinema was designed in a Hispano-Moorish style, with seating provided in orchestra and balcony levels.

In 1946, it was sold to the Kerridge-Odeon chain, and later that year, it was badly damage by a fire. It was renovated to the designs of architect Harry Francis Willis. In the 1960’s, live stage shows became popular at the Majestic Theatre, with ‘Startime Spectacular’ running for quite some time, and also appearances by pop groups from Great Britain, including The Beatles, The Kinks, The Dave Clark Five and Manfred Mann.

The Majestic Theatre closed on 28th August 1970, and was converted into a nightclub, named Moby Dick’s Nite Spot. In 1976, the building was again badly damaged by a fire, and the nightclub was closed.

It was purchased by the Christchurch Revival Fellowship, who restored the building in 1978 as the City New Life Centre. In 2009, it was known as the Majestic Church, with a seating capacity for 1,100, and plans were proposed for further restoration. It was demolished in 2014 following damage from the Canterbury earthquake.

An August 2008 photograph of the Majestic Theatre, with additional historical details:
View link

Damaged by fire in 1976, demolished 2014 following teh Canterbury earthquake.