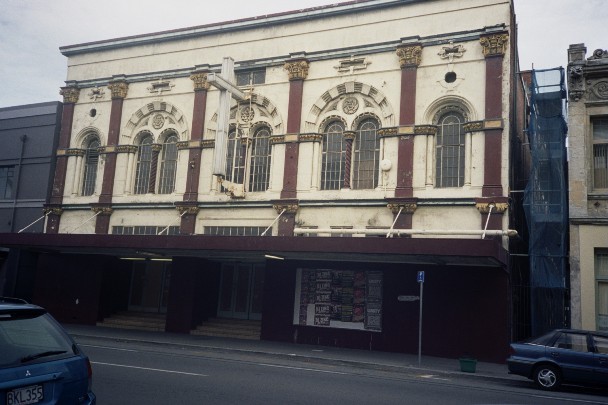 Built in 1883, this stunning, freely treated Italian style vaudeville venue opened for business. At the time it was the largest building erected as a place of public entertainment in Christchurch, decorated in in a eclectic array of Italian motifs, the elegant street-front façade was the grandest in the city. The stalls held 1,400 whilst the immense balcony seated 600.

In 1930, it became the St. James Theatre, completely remodelled. The dress circle was reshaped into a gentle curve, re-raked to seat 420. Hosting a plethora of live-acts, international acts including Sir Laurence Olivier and the Old Vic company from London, England, the St. James Theatre coasted along with films and acts until 1959, when Kerridge Odeon bought the property and the Odeon was opened September 27th 1960, twinkling with an unequalled taste and elegance. The dress circle ceiling was raised four feet to avoid cropping the 70mm projection.

Of all of Christchurch’s grand old cinemas only the Odeon has retained it’s period interior decorations. The Odeon closed August 1983 and sold to the Assembly of God who have since departed in early-2004. The theatre is now in the hands of property developers and it’s future is in crisis mode, given its age, it does not have time on it’s side with many earthquake issues outstanding plus as of last visit June 2004 there are many areas of plaster failure and damage. The stage house was demolished in 2012, but the remainder of the building still stands in late-2013…just.

The Odeon Theatre auditorium was later demolished following an earthquake, but the façade was still standing in August 2020. It is a category 1 Heritage Listed building.

Cleaned up the theatre today ready for Thursday presentation, everytime i’m in there it causes sweeping sensations of grandeur for the greater film community of Christchurch, many of our film communities are just waiting in the wings to springboard the restoration and upgrade. There will be a display of vintage film posters in the upstairs foyer on Thursday. The general public are invited to attend a tour of the theatre from 7.30pm onwards, join us for drinks and discussion with the Odeon Trustee’s. For further information e-mail/ .nz

Fantastic News- The Odeon Theatre has been sold!!!!. The Theatre has been derelict for about 3 years. It was purchased by Property Ventures Ltd for a undisclosed sum early December. The company guru David Henderson has stated that this Venetian Gothic theatre will restored back to it’s original granduer. I consider it from what i know that likely it will once again reflect it’s entertainment past in it’s future journey. Structural reports are being assembled and analysed as i write and currently the theatre is undergoing weather proofing to stop further damage to it’s internal fabric.
This result is a victory for heritage and a victory for all lovers of the arts in Christchurch.

Updated News. Currently the Odeon is in a ‘holding patten’ whilst an exciting nexus of ‘lanes’ are developed around the theatre’s vicinity. The Odeon is in a very strong position of being a beacon of the entertainment district once it’s future is finalised.

Can anyone tell me what is happening to the Odeon Theatre in Tuam Street, Christchurch. I am from the French West Indies, but would love to have any information regarding this gem of a theatre.

This former cinema suffered damage from the February 22, 2011 Earthquake.

The Odeon has suffered damage due to quake, a slumped portion of roofline over the auditorium (front half) is cause for concern, likewise the trajectory of fallen stagehouse bricks in the same area- interior no word, not currently on the demolition list.

Has since been schedule for demolition.

Plan is to demolish the stage house plus most of the auditorium up to maybe the balcony area (unless not feasible). The foyer areas look set to be retained at his stage. The cinema suffered catastrophic damage furthered by the June quake. The lower stalls area of the roof has collapsed into floor A truly sorry sight…. Will try and post a few photo’s soon. Christchurch has virtually been wiped of most of it.s remaining cinemas bar the Majestic ( currently being considered for a rescue plan by it.s owners)

Demolishion of this cinema began on 10 September, 2012. The frontage is in a sad state and is not worth saving. Of the original “hay-day” cinemas, only the Majestic and Avon are left,