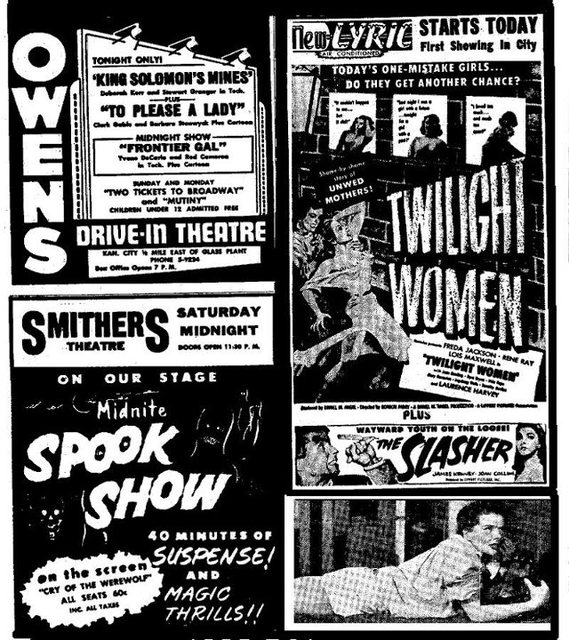 There was new development in Smithers in 1938. The November 12 issue of Boxoffice said this: “The Black Diamond Theatre Company, Montgomery, W. Va., is opening a new home at Smithers, W. Va., November 9. The company operates ten theatres in West Virginia.”

This was apparently a new theater at that time. The August 6, 1938, issue of Boxoffice had run this item: “SMITHERS, W. VA.— A new theatre is being erected here by the Black Diamond Theatres, Inc., with headquarters at Montgomery. Gene Hensley and Archie Clemens, executives of the company which operates a half dozen theatres, state that the Smithers Theatre will have a seating capacity of 400 and that opening is scheduled for early October.”

The August 20 issue of Boxoffice also had a brief item saying that Black Diamond had a theater under construction at Smithers. This was probably not the Fountain Theatre, which is mentioned in 1931 issues of Movie Age. If there was a Smithers Theatre listed as early as 1930, it must have closed before this 1938 project was built.

It’s unfortunate that the picture doesn’t show the theater pre-1979 or so. The theater still had the boxoffice before it was converted to a church. Hopefully someone has a picture of it somewhere.

Hey guys my name is Lowell Thomas. This Building that used to be The Smithers Theater is now Bethel Church! the Church is headed by Pastor Miller an My father is the assistant Pastor Lowell Thomas Sr. The address is actually 114 Michigan Ave Smithers WV. The reason I’m actually writing is because I could use some help. I’ve been working closely with the church to get this building put of the Historical Registry so we can renovate it back to its pristine historical condition! In order to get it on the registry I need to be able to submit substantial proof that this building has a historical Value based on the registries criteria. I’m trying to collect as much information as I can on this building an a timeline of the The Smithers Theater! @ Mr Kilburn I notice you said your father used to own this theater I would love the opportunity to speak with you or your father about The Smither Theater an any information that you could share on this building. You as well as lost memory have a wealth of knowledge about these theater based on the comments I’ve read an I could use all the help I could get! Please respond to me if their any information you can provide for me on this subject! I’d Greatly appreciate it…. I can be reached by email at ……..Best Regards