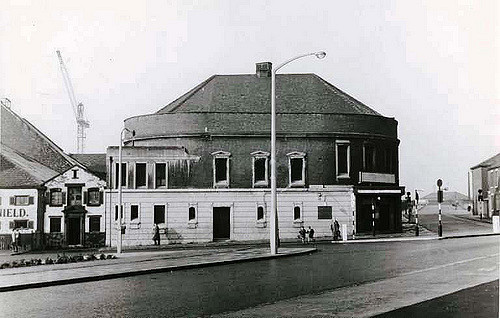 Opened 1921, the Star Cinema was located on Corporation Street at the corner of Fylde Road, and was described as an ‘American’ style circular shaped building. It had a 30 feet wide proscenium, a 10 feet deep stage and two dressing rooms. There were continuous performances from 6.15pm and daily matinees and double features even in those days. The Star Cinema became the first cinema in Preston to screen talking pictures in 1929 when it was taken over by Associated British Cinemas(ABC). In 1934 they leased it to an independent operator and ABC sold the Star Cinema in July 1935.

The Star Cinema closed appropriately on American Independence Day in 1959.

It had very much been a local cinema, but the ‘locals’ were now few and far between because of housing clearance. The Education Committee bought the building and the site for 6,750 GB Pounds for an extension to the Polytechnic which is now called University Of Central Lancashire (UCLAN)