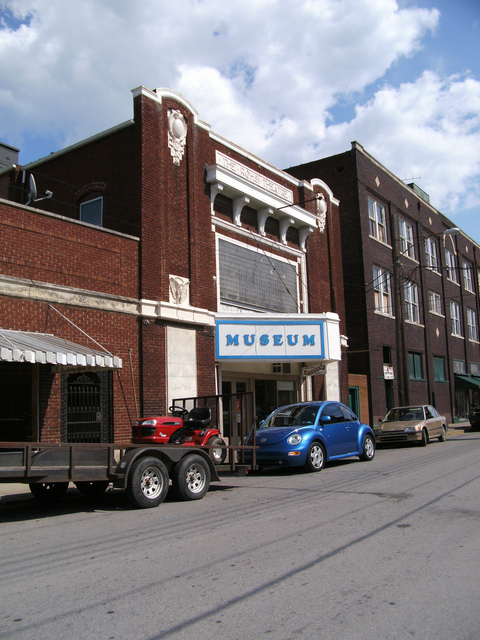 The Rohs Theatre was opened in 1920, and operated thru to at least 1950. This small theatre building is currently housing a museum in Cynthiana, KY.

I’ll get back for more pics when I have more time.

Unless I’m sorely mistaken, this theater was open in the 70s and 80s as I was there almost every week watching a new movie. I saw Star Wars there among others. I remember it was a one screen theater, quite fancy too. There was an upper balcony and lots of the older style fancy theater curtains you’d see in years past. I cannot say for absolute certain the last movie I saw there before I left Cynthiana, but I most definately saw Return of the Jedi there which was in 1983 and it’s the last movie I can remember seeing although I likely saw other less memorable movies after that. If I somehow managed to confuse this with the nearby opera theater, I apologize, but I do believe this was the one I was at all the time back then.

The Rohs Theatre, in the photo above, now the home of The Cynthiana-Harrison County Museum, is at 134 S. Walnut Street. This is the museum’s web site.

Cynthiana is also the home of The Rohs Opera House, an entirely different theater located at 133 E. Pike Street. The two are conflated all over the Internet, and we don’t want to be adding to the confusion. According to various web sites, the Opera House dates back to 1871, but a movie theater was installed on the ground floor (the Opera House was upstairs) in 1941.

The Rohs Theatre is mentioned in the trade publications a few times, though the earliest I’ve found so far is from 1929, but there is also an item in the May 10, 1913, issue of The Moving Picture World announcing the recent opening of the 400-seat “Prows Theater” in Cynthiana. It’s possible that a typesetter scanning hastily scribbled notes misread “Rohs” as Prows, but it’s also possible that there was a Prows Theater, as an Internet search brings up quite a few people with the surname Prows in that region of Kentucky. The latter seems less likely than the former to me, though. Plus, from its architectural style, the Rohs Theatre building looks quite likely to have been built in the early 1910s.

Correct address is 124 S. Walnut Street per the museum’s website. Active link below.

This item is from the September 11, 1920 issue of Exhibitors Herald:

“FRANKFORT, IND., Aug. 31.— Herman Rohs, for many years a jeweler in this city, has just completed the erection of a motion picture theater at Cynthiana, Ky., according to information received here. The new theater will run pictures and vaudeville and will be under the management of Karl Rohs, son of Herman Rohs.”Herman Rohs was not only a jeweler, though. Various issues of The Billboard in 1908 mention H. A. Rohs as the manager of the Rohs Opera House. The Rohs Opera House is listed in the 1914-1915 American Motion Picture Directory, so that upstairs theater, opened in 1871 as Aeolian Hall, also ran movies for a while. In 1941 the Rohs family added a new ground floor theater to the back of the Opera House building, and it opened that year as the New Rohs Opera House.

I’ve been unable to discover when the Rohs Theatre closed, but the Rohs Opera House was still showing movies into the 21st century, and is still intact and equipped to show them, but does so only occasionally.