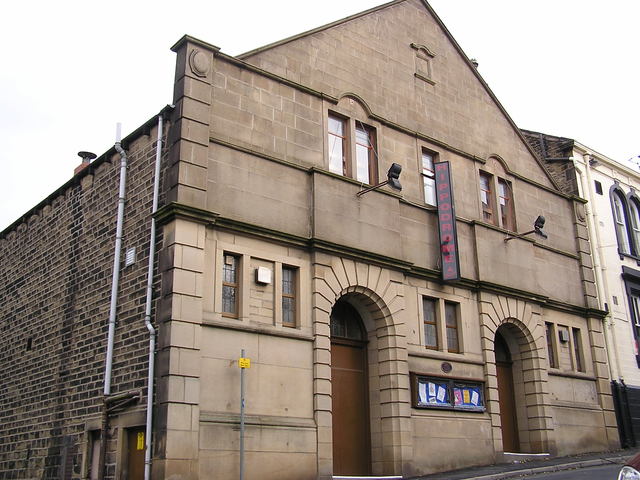 Opened on 21st September 1914 the Pendle Hippodrome Theatre was a cine-variety theatre, through until 1931 when sound was installed and the Hippodrome became almost exclusively a cinema.

It was designed by R.S. Pilling and seated 980, by 1943 this had been reduced to 860 and currently has (part of the rear stalls have been sub-divided to accommodate a bar) 489 seats, 138 of which are in the single balcony.

The Hippodrome Cinema closed on 8th April 1965 and was converted into a bingo hall which lasted until 1978. Three local amateur theatre groups then negotiated to buy the building and a long expensive haul to repair and update the theatre began, culminating in reopening on 6th December 1986.

It currently has a lively programme of theatre, music and stand up events, both amateur and professional, but sadly no films.

Photos (external and internal) of the Pendle Hippodrome here, dating from 1994:–

The interior fibrous plasterwork was by W H Horn Ltd of Idle, Bradford (Idle has a famous working men’s club).

Sound debuted on 20 April 1931 (a month ahead of the Savoy) with a Western Electric system. Oddly, this is not listed in Kinematograph Year Book 1931, whereas the Savoy’s is.

Up to KYB 1936 the proprietors were ‘Varieties (Colne) Ltd’ who also ran the King’s Theatre on Ivegate in the town. In KYB 1937 ownership changed to ‘Victoria Picturedrome (Colne) Ltd’, who also owned the Savoy. That lasted to KYB 1949; Star Cinemas are listed owners of both in KYB 1950 and after.

On Wednesday & Thursday, 14 & 15 August 1963, bingo was introduced for two nights each week. After 10 June 1964 it was full-time bingo, with Saturday children’s matinees. It reverted to full-time films on 1 November 1964 with ‘Hard Day’s Night’; they ended on 8 April 1965 with ‘30 Years of Fun’ (a compilation of archive film footage from silent and early talkies eras).

The heating system was overhauled and bingo became the sole business until closure in May 1978.