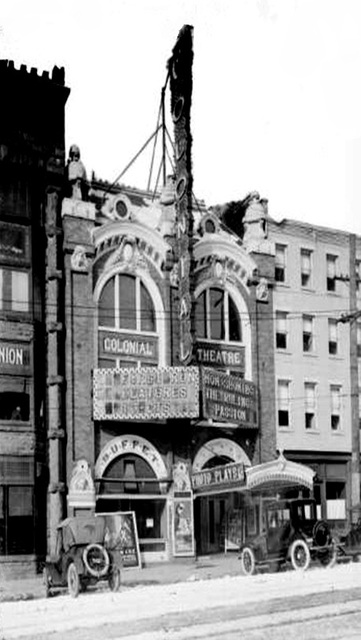 The Colonial Theater was a silent-era theatre that opened on January 11, 1909 with the play “If I Were King”. It was designed by Toledo based architect Arland W. Johnson. Over the years it presented drama, comedy, concerts, opera and movies. The Colonial Theater was closed on September 6, 1924 and demolition began the next week. On the site was built the Keith-Albee Palace Theatre & American Insurance Union Citadel.

The current PALACE theatre is located at 40 W. Broad street, so this theater would have been approximately at that location.

It is possible that this theatre was closed in anticipation of the construction of the AIU Citadel (Now Leveque Tower) at this location. That building opened in 1927 after some delays in construction.

The October 13, 1917, issue of The American Contractor said that the Colonial Theatre on Broad Street in Columbus was being remodeled, and that the work was about 1/3 complete. The architect for the project was Fred W. Elliot.

Dear Lost Memory, thanks for the awesome photo of the Colonial Theatre! It looked like it was really cool! Here’s the updated link in case someone wants to see it:

According to the TheatreOrgans.com Searchable Online Database of original installations, the Colonial Theatre had a Wurlitzer style V theatre pipe organ, Opus 101, installed on September 23, 1916.

The style V was a piano-console instrument with two manuals and eight ranks, plus two tuned percussions (cathedral chimes, and then the piano).

It did not feature any other tuned or untuned percussions, so possibly the pianist/organist who played the instrument worked as a duo with a live drummer/sound effects man (who was quite common in theatres during this period anyway) to provide appropriate noises for the pictures. This is my theory, anyway!

Does anyone know what became of Wurlitzer theatre pipe organ Opus 101? Its fate or current status is listed as “unknown” in the database.