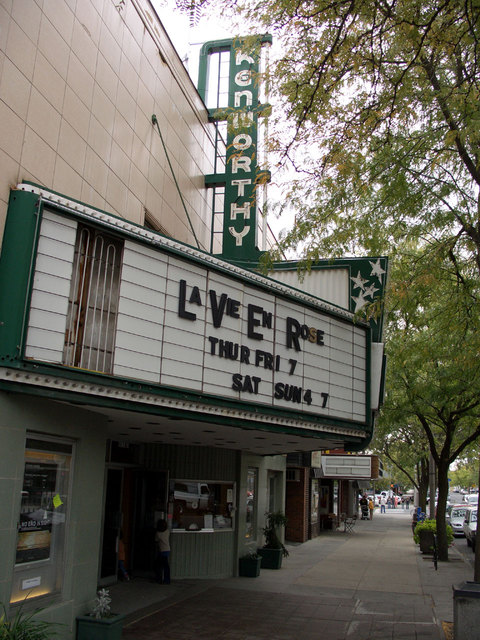 The city of Moscow, with a population of 18,500, is the home of the University of Idaho.

The Kenworthy was opened in 1926 by Milburn Kenworthy as a vaudeville and silent movie house and it later became a first-run theater during Hollywood’s golden age.

A 1949 remodeling with a new facade and marquee brought the theater up-to-date for its role as Moscow’s finest showplace.

After finishing its lease with Carmike Cinemas in the late 80s, it was given by the Kenworthy family to the Moscow Community Theater.

In 1999 the Kenworthy Performing Arts Centre, Inc. was created to oversee its restoration and operation. In late 2000, after a major renovation, it began to show classic movies and stage live theater productions by the Moscow Community Theater.

While undergoing restoration, the Kenworthy will be available for use by the community and at times open for viewing to the public. The Kenworthy is next door to the Nuart, another classic theater, and in November of 2001 both theaters were placed on The National Register of Historic Places.

Style should be updated to Spanish.

Here is a photo:
http://tinyurl.com/2fcyrq

There are some September 2007 photos on this page:
http://tinyurl.com/5tp7or

From 1952 a photo postcard view of the Kenworthy and Nuart Theaters in Moscow.

Update on listing for Kenworthy. The information you have in the listing is often out of date or inaccurate. The listing should read:

The theater both rents the venue for all performing arts, from dramatic theater, dance, concerts, lectures, and films; as well presents all types of films (independent, art, foreign, Hollywood( individually and in festivals (Native American, French, Food, Fifties).

The theater, with its magnificent marquee in downtown Moscow, is the center of performing arts in this university town and provides a gathering place for people of the area, the University of Idaho, and Washington State University.