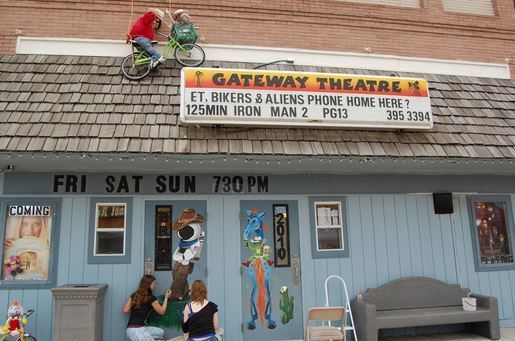 Originally opened in 1911 as the Keith Theatre. By 1914 it had been renamed Rex Theatre. The theatre has been renamed the Gateway Theatre after The Gateway Youth Foundation which purchased the shuttered movie house in January 2002 for $35,000.

The Albion, Nebraska theater underwent a year of restorations completed by students and members of the Gateway Youth Foundation. The 269-seat movie house reopened in May 2002.

The restoration project included gutting the interior, repainting the facade and the auditorium’s walls, and cleaning the existing seats. New carpet and tile was also installed.

Other touches included a new projector and the installation of digital sound.

The Gateway is Albion’s only movie theater.

If you would like to see pictures of the Gateway Theatre, go to View link

Here is an article concerning the restoration efforts in 2002:
http://tinyurl.com/lrz2k

Out of curiosity was this theatre known as the Rex Theatre from the mid-1920’s through the 1980’s. There is a Rex Theatre listed for the same address as the Gateway through those years.

The Rex was one of two movie theaters listed at Albion in the 1914-1915 American Motion Picture Directory. The other theater was called the Lyric.