Friends of the Needles Theatre (Official) 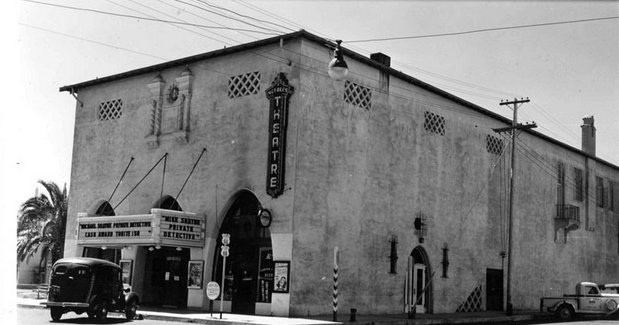 Located at W. Broadway Street and F Street. Built in 1929 as a theatre, with a Masonic Temple on the second floor. The Needles Theatre opened as a movie theatre on March 14, 1930 with Charles King in “Chasing Rainbows”. The theatre operated continuously until it was badly damaged by fire in the early-1990’s. It has been closed ever since.

The Needles Area Chamber of Commerce, which purchased the building from the Masons in November 1997, commenced a $4 million renovation and restoration effort in 2002.

The first project was to repaint and refinish the theatre’s façade.

The NACC is currently looking for any historical records, documents, photographs, etc. which could help in their bid to place the theatre on the National Registry of Historic Places.

If you have any information on the theatre or if you would like to donate money or your time, please contact Sue Godnick, the Executive Director of the NACC at (760) 326-2050.

does anyone know where the blue prints are held?

Hi Lost Memory… I visited once in 1967 enroute to Miami from San Francisco… can’t remember what I saw.
It’s always good to see any theater photo but it’s a shame there’s a car blocking the view and other distracting “stuff” in the picture.
Personally, I like to “crop” my picture view finder by ONLY having the actual subject in the frame and nothing else; like other buildings or people walking by!

What’s the current status of this building?

The Needles Theatre housed a Masonic Temple in the front upper portion of the building while the theatre occupied the lower portion. Since the temple portion didn’t use the full length of the building, the theatre occupied the full height in a large portion of the building. I was informed many years ago the screen was moved forward (perhaps do to the installation of a new and larger screen?)
so that many seating rows and the original stage are actually behind the screen. Sadly, I was informed that nothing much is going at the Needles and that it is again for sale. A fire many years ago forced its closure and it never re-opened

The address should say 823 West Broadway.

The theatre exterior is pictured in a December 2018 story in The New York Times about efforts to develop a legal marijuana industry in Needles. No apparent relation between theatre and pot; I think the photo is just an illustration of woebegone conditions in Needles today. https://nyti.ms/2SJDefN

Uploaded a photo when it was called the Masonic Temple Theater.

The arrival of the guy who later opened the Sands Drive-In. Boxoffice, April 7, 1951: “E. R. Couch has taken over as manager of the Needles Theatre, Needles, operated by the Midwest Amusement Co. He succeeds Chester Bostick, who has been transferred to the circuit’s showcase in El Centro. Couch hails from Kansas City.”