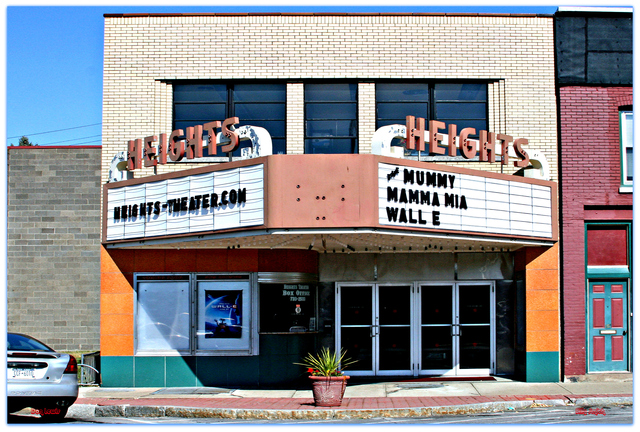 This theatre is now open.

Was this theater at one time called the Strand?
My great uncle owned a Strand theater in Elmira. It was 2nd run with double bills changing every three days and the theater was dark on Wednesdays. Closed in the mid 1960’s. I remember visiting him a couple of times when I was around 11 years old and always had the greatest time. The projectionist let me rewind reels and showed me how to do reel change-overs. The screen was always exposed although there was a curtain but not operational. The black border curtains did open wider for Scope pictures . .. although the extra width seemed to be just a few feet on either side. So there was really not much difference in screen size between Flat and Scope films. The projector’s anamorphic lens could be adjusted to fit the screen and I’m sure that to fill the top and bottom of the screen the sides of the picture were heavily cropped.

I’m pretty sure this was formerly the Strand, although the Strand had a moving light marque, so I may be mistaken.

The Strand was located in downtown Elmira and was demolished in the 70’s. This was always the Heights.

A genuine “cinema treasure” and success story due to the hard work and dedication of the current owner Craig Spencer. With special thanks to him for a tour and permission to post the 1949 photo of the Heights. Three views of the theater here, here and here. Two auditorium views here and here. And the 1949 photo here.

November 25, 2008 ends my 6 years of operating the Heights Theater. I have sold it to the owners of the Glen Theater in Watkins Glen New York.

Good luck Craig!! I know you had put a lot of hard work and money into the Heights.

From 2007 a view of the Heights Theater in Elmira Heights NY.