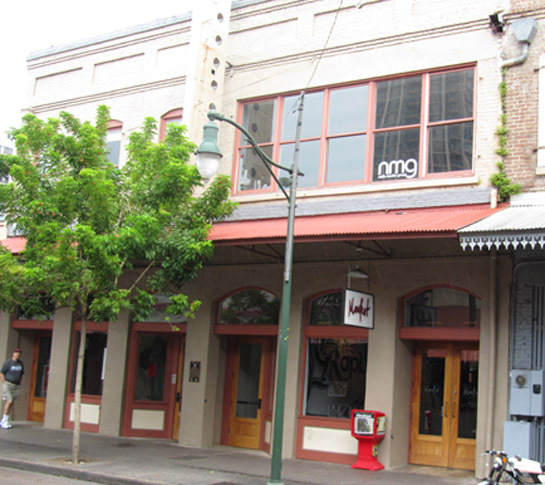 There was another Risque Theatre located at 1021 Smith Street, Honolulu which has its own page on Cinema Treasures.

This section of downtown Honolulu was a hotbed of red-light activity, until its massive clean-up coinciding with the restoration of the nearby Hawaii Theatre in the late-1990’s. Next to where the Hawaii Theatre is now where the Lido and Lido II adult theatres were.

Back in World War II, Hotel Street, so named because of the 2-story hotels which lined it, would have ladies of the evening endorsed by the military(!!!) - whom were ignored by the Honolulu Police and allowed to do their trade! It was so busy with lines around the corner that each soldier had only 15 minutes with their woman.

In the late-1960’s/early-1970’s, there were newspaper advertisements for live sex shows, a first ever total nude male waiter bar, Club Hubba Hubba’s live strippers, and a line of magazine stores with peep booths, and everything that came with the new sexual liberation and the playing of X-movies “Deep Throat” & “ The Devil in Miss Jones” etc. The Betamax - the worlds’s first Video Cassette Recorder for the home, would debut in 1974, and its rival VHS in 1975: These machines were about $1,000.00 and were a big investment so many people did not have them until the late-1970’s, and porn was a big driver of rentals and sales to where people could watch X-Rated content in private. Still, while somewhat embarrassing for them, people would go to a theatre and sit with stangers and watch adult material, hoping you would never run into anyone you knew from work, your community, or God forbid, a family member.

Unlike the modern repair restorations and a bright-colored and welcoming paint shown in the picture, Risque Theatre & Risque II Theatre - like most of the adult places - were dark coloted, dilapidated and run-down places with bad plumbing.

Religious groups would sometimes thump bibles out in fron of Risque Theatre, as public buses would go down the streets. They would stop teenagers and talk about the bible to those men who just turned 18 and were going for their first experience in the red-light district.

As you first entered the Risque Theatre, there was a staircase going upstairs to Risque II Theatre, and that was exclusively for gay men, and many other men who were ‘curious’. Once upstairs and after paying the cashier, you entered into a pitch-dark hallway with rooms with doors you could lock, where men went to go to make-out on flat, elevated beds (like the type you find in a doctor' office when they ask you to lie down). The only light would be coming from the window on the second floor and the adjacent neon sign, which ironically is seen in the modern picture here. There weren’t that many windows back then -they are either new, or if they existed during Risque II Theatre’s era, they were boarded up and covered.

It was very dumpy and pieced together by the worst carpentry. Lean on some of the walls and they would move, close to being knocked down.

In the 1980’s and early-1990’s, it was a time when gay men were still very afraid to be ‘out’ and society further shunned gay sex because of the AIDS crisis. This ‘taboo’ made going to places like Risque II Theatre somewhat exciting and underground - something lost on today’s youth coming of age, because everything is so out in the open with the Internet that there seems to be nothing taboo anymore. While times are better now for gay men, something was also lost with the openness of sex in the computor and smart phone age…with dating and sex apps at the touch of a finger. When it was naughty and when you were not supposed to look at it, that made being in Hotel Street’s red-light district very exciting.

Also in that era, it was against military code to be gay and serving your country, and one could find MANY servicemen - both gay & ‘straight but curious’ going to Risque II Theatre upstairs. My uncle told me all the stories I am writing about, spoke of so many amazing looking young military men 18-25 who were afraid they would be seen and caught by fellow sailors who were at adjacent strip clubs, so they had to be descrete entering Risque Theatre downstairs (where there were staight porn movies and magazines), then sneak upstairs to Risque II Theatre when they were sure no one could see from the sidewalk right by the door.

Risque II Theatre upstairs was the only gay adult theatre in downtown Honolulu. You’d have to go into Waikiki to find the other one, and there was a gay bathhouse near where Hula’s bar was originally founded (before they moved in 1998 to across from the Hololulu Zoo).

In 1960 in the U.S., there were roughly 20 adult movie theatres (theatres which showed only pornographic films);by some accounts, by 1970, there were 750.

What a fabulously appropriate name for an adult theatre.

Risque II is closed, and has been for a few years. As the sign in the photo above shows, it is now the Manifest, a cafe, cocktail bar, and art gallery

This opened with one screen on December 11th, 1969. Ad in photo section.