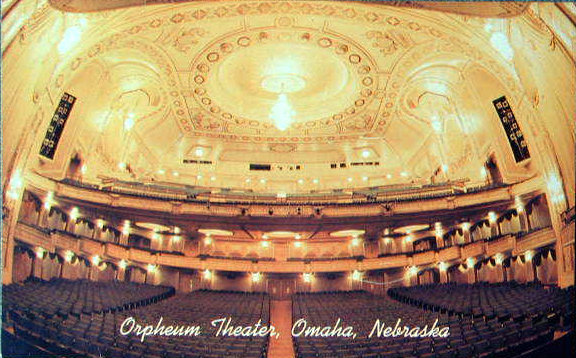 Originally opened on October 9, 1927 with 2,975 seats. The Orpheum Theater has seen the biggest names in entertainment history perform there.

In 1975, the Orpheum Theater received a two million dollar renovation which has helped insure it retains the classic look of the old Orpheum’s of the past: elegant, classy, and timeless.

Today, the Orpheum Theater is managed by the Omaha Performing Arts Society, which also manages the Holland Peforming Arts Center in downtown Omaha, which opened in October of 2005.

Here is a March 2009 item from an Omaha TV station:
http://tinyurl.com/deppsy

From the early 1900s a postcard view of 16th Street along with the Orpheum Theater in Omaha.

You are really confusing people by mixing photos and addresses for two completely different theaters! The Creighton Orpheum Theatre, which you have pictured, was the original theater with an address on South 15th street. It was built as a vaudeville house. The new Orpheum Theatre, a completely different building, was opened on the same block in the 1920s with the entrance on Harney Street. During a later remodel, part of the lobby of the City National Bank Building, which stands next to the theater, was purchased and donated to the city for use as the main entrance on South 16th Street. The rest of the bank lobby has since been purchased and included as part of the theater lobby.

Quite a few comments point out that the Orpheum Theatre opened in 1927 was an entirely different building than the much smaller (800 seats) Creighton Theatre, opened in August, 1895, and taken over by the Orpheum circuit in 1898. The original Creighton/Orpheum Theatre was demolished in 1926 to make way for the new Orpheum. If it can be established that the original Orpheum ran movies, it should have its own page.

Also, the Wikipedia article linked in an earlier comment also has an error. It lists Holabird & Roche as architects of the Orpheum, along with Harry Lawrie. In fact, this was the team responsible for the City National Bank Building, in which the Orpheum’s entrance was once located. Interestingly enough, Harry Lawrie was apparently one of the architects (Fisher & Lawrie) of the original Crieghton Theatre, though so far I’ve only found one source making this claim.

I posted the grand opening ad from October 9th, 1927 here.

According to graffiti in the projection booth, “The Barefoot Executive” was the last movie screened at the Orpheum, before it was acquired by the City of Omaha.

(My brother used to record Orpheum performances for KIOS-FM. My mother and I would “assist” him by carrying in the recording equipment, then moving down to empty seats during intermission.)

“On Golden Pond” had it’s “national premiere” here (it was already in limited release to qualify for the Academy Awards), due to Henry Fonda’s hometown roots. The premiere was a fundraiser for the Omaha Community Playhouse, where Fonda was once a fledgling actor.

There is an excellent 1928 photo of the Orpheum on the Historic-Memphis.com website’s Theatre Page. Here’s a link to the page.

The Nebraska State Historical Society’s page about Omaha architectural firm John Latenser & Sons includes in its references section a listing of the Orpheum Theatre as a 1954 project. Given the timing, this was likely a renovation that included adapting the house for CinemaScope movies.