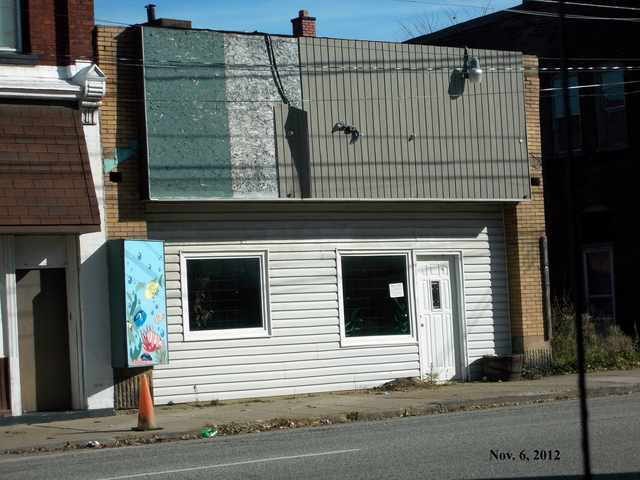 The Hippodrome Theater is located on upper Peach Street in Erie, Pennsylvania. It was opened around 1915 and is listed as operating under that name until until at least 1943, when it became the Hillcrest Theater, continuing into the late-1950’s.

It has been used for storage or stood empty. I last saw it in 1995.

Am not familiar with this theater in Erie, but certainly the Erie Playhouse which had another name years ago and the restored Warner Theater on State Street.

The whole neighborhood where the Hillcrest/Hippodrome theater is located has great potential. As it is now it is a botched up mess. Bury the power lines, fix up the great old buildings around there and do something with the big old schoolhouse up the street—at least tear off that ugly auto parts store in front of it. Maybe it could be turned into a youth hostel or something. The business that occupies the theater could be enticed to move somewhere else nearby and the theater restored to show cartoons and old newsreels and maybe old movies, even silent ones. I say turn the art and architecture majors from Penn State Behrend and Gannon loose on that neighborhood—anything they produce has got to be better than the mess that is there now. And turn that green area in front of the bank branch (whose architecture doesn’t go with the neighborhood BTW) into a park if nothing else. Dare to do something different, Erie!

The Hillcrest was one of the last neighborhood theaters to close in the mid 1960s.I use to go there every Sunday. It always had a double feature, news, and a cartune. It cost just 50 cents and sometimes you got free popcorn. If you looked down at the floor when you entered the theater you saw it’s old name Hippodrome. What a fun time.

Despite a slight address discrepancy, the Hippodrome was probably the project noted in the August 7, 1915, issue of The Music Trade Review: “A new moving picture theater will be erected at 2509 Peach street, Erie, for D. A. Billig.” A Mr. D. E. “Billie” (Billig was apparently the correct name, as it appears in several other sources) was noted as operator of the Hippodrome Theatre at Erie in the February 26, 1916, issue of The Moving Picture World. The house must have opened in late 1915 or early 1916.

I have an unfortunate update for this theatre. Rarely do I drive past this area, so I was shocked to see an entirely new-looking building in its place. Whether they demolished the original building or just made major renovations I’m not sure, but the exterior is tan stucco now and is roughly the same height as it was originally. I believe it is still being used as some sort of pet store.

Leo Guerrein was born in Germany in 1868 and came to this country in 1892, locating in Erie. He established a wholesale cheese business in 1895 at 2509 Peach Street, where the business was located until 1916, at which time it was moved to 1014 Holland Avenue. On December 16, 1916, Mr. Guerrein retired from business. He resides at 2509 Peach Street. Mr. Guerrein has been successful in his business undertaking and owns several pieces of valuable real estate, including the Hippodrome Theater.

I believe that the remodeled building Frank Albrecht mentioned is indeed the former Hillcrest Theatre. It is currently occupied by businesses called Diamond Design Construction (probably offices, located at the rear of the building but with a narrow entrance at the street) and Tamara’s Spa Salon & Hair Studio. Their addresses are, respectively, 2503A and 2503 Peach Street, so the theater’s address was probably 2503.

2505 is a vacant lot, which judging from the fenestration in the building across it from the theater’s site was always there. The detail around the windows indicates that they are original to the building, and the building looks to have been built no later than the 1920s.

The former theater building has a side entrance near the rear onto the vacant lot, and it is at a lower level than the front entrances, indicating that the building floor sloped downward at one time. The entrance tot he construction company’s offices probably slopes downward. Entirely new construction would be unlikely to be built on two levels like that, so this probably is the old theater building remodeled.

Hurstpacman’s revelation that Mr. Guerrein’s residence was at 2509 Peach is confirmed by the notice in the February 20, 1915, issue of The American Contractor:

The notice in The Music Trade Review cited in my previous comment obviously mistook Mr. Guerrein’s personal address for the location of the theater project. “Private plans” indicates that no architect was involved on the project. It was most likely designed by a licensed engineer on the staff of the general contractor, Deutsch & Dudenhoefer.