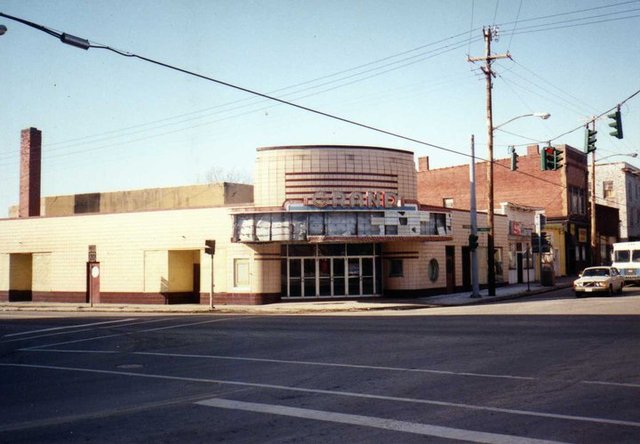 Replacing an earlier Grand Theatre which was destroyed by fire in 1940. The Grand Theatre opened on July 17, 1941, serving the town of Westfield, NY. It had seating for 850, all on a single floor. Its last movie was shown around 1982. It was sadly demolished in 1992.

A number of years ago, I bought a ceiling light at a garage sale in Mayville, NY and was told that it was out of the Grand Theatre in Westfield. I will post a picture of it in the picture section…it seems sort of Moroccan…it’s made of brass with big emerald green stones on each side and lots and lots of very fragile glass tubes hanging off of it. Does it look familiar to anyone who used to go to the Grand?

I haven’t seen your photo though doubt it came out of the Grand as it was art decor themed rather than Moroccan. Please send me the photo via email at Thank you.

dkarslake: The Grand Theatre on this page was built in 1941 and was very modern in style and, like Patsy, I’m doubtful that your lighting fixture would have belonged to it. However, there was an earlier Grand Theatre at Westfield, mentioned in this comment, and it’s quite possible that your fixture came from that house.

The earlier Grand doesn’t have a page at Cinema Treasures, and I’ve been unable to find out anything about it, having seen it mentioned only once in the trade publications, that being in the March 7, 1925, issue of The Moving Picture World. Your light does look like it would date from the 1920s or earlier, though, so it could have come from the old Grand.

Joe: Thank you for the additional information.

Still hoping to see the light fixture photo. Have theatre info though after putting it in clipboard I can’t paste it here.

This article from a local Westfield web site says that the 1941 Grand Theatre was the third of that name on the site. The first Grand opened in 1917, with 775 seats, and was destroyed by a fire on November 3, 1923. The rebuilt house reopened in September, 1924, and was destroyed in a second fire in 1940.

If you have more information re: plans in ‘85 to reopen the Grand, please send to and title it Grand Theatre. Thanks.

Patsy’s latest post refers to a set of movie tickets from the Grand theater that are currently listed on Ebay. (as of 29/03/2021).