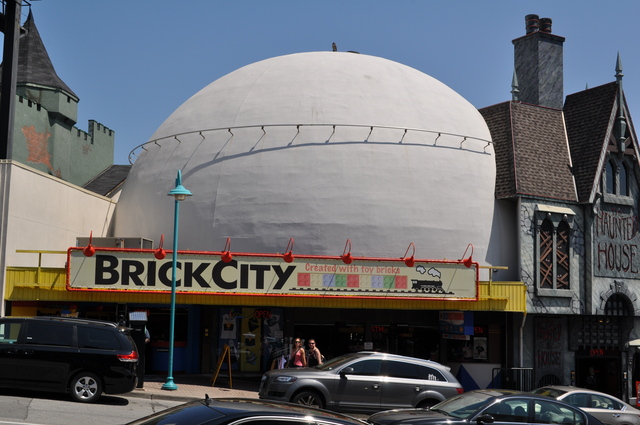 The Cinema 180 Dome opened in 1969 on Clifton Hill in Niagara Falls.

When this cinema first opened, it showed Cinerama films for about three years. After that, the Cinema 180 changed its format and took out some of the seats to make it a standing room cinema. It showed 30 minute movies on a giant four-story 180-degree screen.

It most recently was showing 15 minute, fast action moving movies that make you feel that you’re in the movie. When you entered the Cinema 180, you saw a two car roller coaster with a track in the lobby and airplanes hanging from the celling. This cinema had no snack bar in its lobby, instead there was a gift shop and video arcade.

In this cinema you had the choice of standing or sitting down on its remaining 30 seats. The Cinema 180 was last renovated in 1990.

The Cinema 180 closed in May of 2005 and has been converted into a Legoland type adventure attraction named Brick City.

Sad News: The Cinema 180 Advanture Dome closed its doors forever on May 1st 2005 to make way for a new attraction called The Lego Bricks Advanture. Inside the classic movie dome you will find a 10,000 square feet Lego Land. This cinema was the very last of the Cinerama theatres in Canada. It will be missed by everyone whos visited Niagara Falls Canada.

Very interesting Chad about the Cinema 180. Sounds like it was quite an adventure. By the way, I replied to your question about Sherway cinemas.

does anyone know the original name for this theatre?

Heres some infomation about the CINEMA 180 DOME:
From 1969 till 1973 It was originaly called “The Cinerama Dome” then in 1973 it changed its name to “Cinema 180 Dome” and showed only 70MM films, then in the 1980’s to “The Advanture Dome”. The first cinerama movie showen there was called “This Is Cinerama” and the last cinerama movie showen at the dome in 1970 to 1973 was called “Circus World” which played there for over 2 years.
The dome is still there today but is now a lego bricks museum.

IT IS HIGHLY likely that there is considerable confusion about this theatre. There is NO reference to the theatre in 1969 – 1973. Cinema 180 did not exist prior to 1976. I have information that strongly suggests that this theatre was built from the ground up as an Adventure Dome in the mid to late 70’s.

Thanks to a member of a forum – there is a likelihood that if a “CIRCUS WORLD” film played it was an IMAX short produced in 1974.

I can’t beleive I missed this treasure, I hit the midway almost every week right across the street and didn’t know it was a theater, it was always called the “Adventure Dome”

What a shame! I remember this from my first visit to Niagara Falls (1997) and I had hoped to take my daughter when we take her there for the first time this summer. :(

are there any cinema 180 domes left any where? i loved the one at the great escape in new york, but they closed it down. every time there is something cool like that it never lasts too long. it gave you the feeling of actually being on a roller coaster or flying in an airplane. great for those of us afraid to actually get on a real one. are there any other videos out there that can give you a simular feeling of being on a ride?

There is so much to say, but the first – and simple answer – get the dvd of “Oklahoma!” with the short “miracle of todd-AO”. Watch the short. Now only will you see amazing film – it will begin to give you an idea that there were feature films made to capture the feeling.