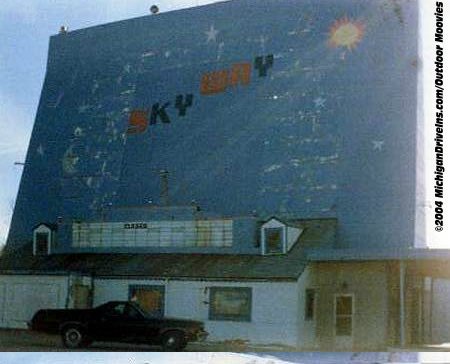 The Skyway Drive-In opened somewhere around 1951. This single screen ozoner had a car capacity listed at 500 with a single screen. The owner was listed as William Rice. No closing date listed but has since been demolished.

The Skyway drive-in had a good way of getting good films and not having to run X rated films.Right up to the end the Skyway was running good movies.Oh it had a few Drive-in type films like on Dec.9 1972 they were playing “BONNIE’S KIDS” and “THE HITCHHIKER” but most of the time it would be like on Nov.2 1974 “SERPICO” and “PLAY IT AGAIN SAM” July 1 1980 and the SKYWAY had “CHINA SYNDRONE” and “AND JUCTICE FOR ALL” with “THE NUDE BOMB” and “RUNNING” coming. On Halloween and other special nights they often treated moviegoers to free coffee and Doughnuts.

The site is still a vacant lot. There was also a Dairy Isle ice cream shop in the parking lot, closed and demolished around the same time.