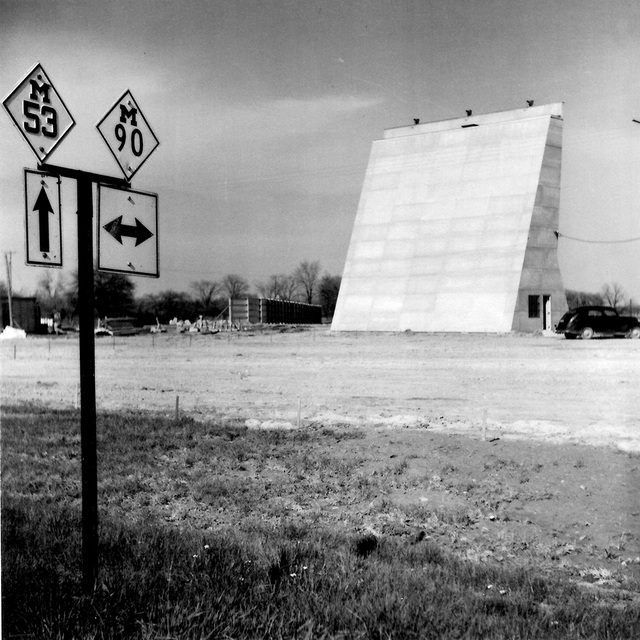 The Burnside Drive-In opened in June of 1951. It was owned by N. Fishner. Capacity was listed at 300 cars with a single screen. No date give for closing.

Information for this drive-in obtained from www.michigandriveins.com

The Burnside Drive-In was located at the intersection of M53 and M90 (5950 Van Dyke Road) in the unincorporated community of Burnside, about eight miles north of Imlay City, Michigan. My maternal grandfather’s Johnson Construction Company built the drive-in in 1951. This was the fifth known Michigan drive-in job of the company.

Three of A.S. “Al” Johnson’s slide images below were taken in January 1951. Two show the tower sheathing being painted, and the third is a picture of my paternal grandfather Robie Gray. He and my dad, Doug Gray, worked on several Johnson drive-in and conventional theater projects throughout Michigan.

The remaining four slides show the drive-in the day of its opening in June 1951. The marquee shows the “Mich. Premier of Country Parson with Peggy Stewart”- a film that (curiously) was released in 1915.

The drive-in, with its distinctive pheasant rising from a farm field mural, was a landmark for travelers for several years. The drive-in has since been demolished.